Irish childcare facilities facing closures due to a lack of staff

"Extremely difficult to recruit staff in the past 12 months."

Irish childcare managers have expressed their concerns about staff shortages.

It is believed over a third of managers in the industry are worried about the impact this could have on their facilities.

Over 60% of childcare services believe they may need to reduce capacity due to staffing issues.

They believe one of the main reasons for these staff shortages is the low pay staff receive. Many are leaving the sector for better-paid jobs.

It is believed they earn less than the living age in Ireland.

"The majority of these indicated that poor pay in the sector was the 'biggest obstacle' they faced when recruiting staff."

"Of the managers who responded to the survey, more than 70% found it 'extremely difficult' to recruit staff in the past 12 months." 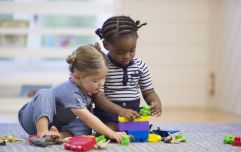 END_OF_DOCUMENT_TOKEN_TO_BE_REPLACED

"We have advertised for months now and just aren't getting people applying. Staff aren't just moving facility, they are leaving the sector. I'm a manager but come next week I will have to go and do both roles; manage and also work in a room with the children every afternoon. I have a masters in this area and I would get better pay in a retail job.

"There's nothing wrong with working in retail, but it doesn't require the level of qualification that I have, or the responsibility. Ages zero to three years are the foundations for a child's life, but childcare is underinvested by our government.

"When we compare our conditions to teachers, we are miles behind."

Read the full report- The Parent Trap: What's being done about the Irish childcare crisis? here.

popular
Lauren Graham shares who she thinks Rory's baby daddy is
Brian Dowling: "Aoife never thought the baby was hers"
7 Christmas markets and Santa experiences to visit with kids this winter
6-year-old child dies from bacterial outbreak at school in England
These 40 baby names are set to trend in 2023
Is a second season of Gilmore Girls: A Year In The Life in the works?
This CoComelon toy is set to sell out before Christmas
You may also like
3 weeks ago
How much should I be paying my babysitter?
3 weeks ago
Warning signs to look out for if your child is being mistreated in childcare
1 month ago
Pippa O'Connor gets honest about hiring a nanny for her children
2 months ago
Parents told to prepare for two-year-long creche waiting lists
2 months ago
Double payment of child benefit on the cards to help tackle cost of living crisis
3 months ago
Almost half of childcare workers are looking for jobs outside the sector
Next Page