Apparently, putting the kids to bed early is good for your mental health, mum

Just admit it – those sacred few hours between your kids going to bed and you can head off to bed yourself are total bliss.

This is our chance to exhale. To not have someone call "mum!" every four minutes. To catch up on things. To sink into the sofa and just soak up some longed-for alone time – or adult-only time.

And if you want to really do something good for yourself, mama, then you make sure that the gap between their bedtime and your own bedtime is a nice, big long one.

Not only because kids who fall asleep early are more likely to be healthier, but also because their mums have better mental health, some recent research has found.

“So mums and dads, getting kids to bed early is not just great for them. It’s good for you, too,” said Jon Quach, lead author and research fellow at the Murdoch Children’s Research Institute in Melbourne, Australia, in a written statement.

Quach and his colleagues defined "early to bed" as being asleep by 8:30 p.m.

The study results are based on interviews with children and parents taking part in the “Growing Up in Australia” study, which began tracking thousands of Australian families in 2004 and continued to check in with them every two years.

For this analysis, researchers used information collected from parents of kids who were 4 to 5 years old, then again when they were 6 to 7, and finally when they were 8 to 9 years old.

After crunching the study’s sleep and lifestyle data, the researchers found children with earlier bedtimes had “better health-related quality of life” compared to the other kids, while their mothers had improved mental health. 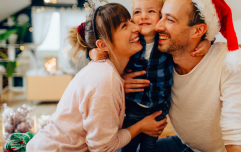 Children who get more hugs have bigger brains, a new study has found

END_OF_DOCUMENT_TOKEN_TO_BE_REPLACED

This was true regardless of how long the children actually slept — the key was going to bed early.

That’s a very typical bedtime for early school-age kids, whose level of melatonin — the hormone that helps the brain chill out and fall asleep — tends to peak around 8 o’clock at night, said Dr. Wendy Sue Swanson, a Seattle paediatrician who writes the Seattle Mama Doc blog.

“We know that sleep is a really relevant part of our mental health, our mood. We know in kids, it’s related to behavioural [issues] and the ability to self-control,” Swanson told TODAY Parents.

“When we think about mum, it makes a lot of sense to me that if kids are early to bed, mum is going to wind down, get things done and feel like things are under control.”


popular
Breastfeeding: The amazing tip one midwife gave me on how to clear a clogged milk duct
This amazing hanging egg chair is coming into Aldi next week and go, go go (but safely)!
These 5 Foods Could Increase Your Chances of Having Twins
Fighting Words is running free online summer camps for kids and teens
Energia and GIY are giving away free grow boxes so you can start a vegetable patch with your kids
Super simple trick to keep paddling pool clean when your kid isn't using it
20 Unisex Irish Baby Names That Are Absolutely Magical
You may also like
1 day ago
Research says the more you love your kids, the bigger their brains grow
1 day ago
Study states we all need to stop using 'time out' to correct bad behaviour
4 days ago
Does your newborn hate the bath? My mum taught me a special trick to try – and it works
5 days ago
Parents spending too much time on their phones is a bigger problem than screen-obsessed kids
5 days ago
Baby boys are more vulnerable to stress than baby girls, but here is how you can help
5 days ago
A dad who grew up without a father started a YouTube channel to teach 'basic dad skills'
Next Page