A mum in the UK has been ordered to have her sons vaccinated for their own health and the wellbeing of the general public.

High Court judge Mark Rodgers has told a vegan mum that she must comply with an order from the Court of Protection to have her children vaccinated, the Daily Mail reports.

The mother, who cannot be named, said that she is so opposed to vaccinations and medicines that she won’t even give her children paracetamol,

"Their bodies are as free of toxins as I can possibly make them."

Judge Rodgers stated that the mum had attempted to get a medical expert to appear in court to support her views, but could not find anyone willing to do so. The judge ruled that the two boys, who are aged four and two, must be vaccinated for their own sake and for the wellbeing of the general public,

"I am truly sorry that the mother will regard the decision as wrong, but my objective duty is clear. I have serious concerns as to her ability to look objectively and even-handedly."

The children's mother informed the court that her eldest son had suffered with eczema, cradle cap, and a cough as a result of some previous vaccinations that he'd had. She also claimed that vaccines would put her children at risk and go against her beliefs as a vegan,

"What I have learned simply is that, yes, vaccines do work some of the time, but there is a definite risk with vaccination. The vaccine manufacturers have cited that vaccines are 'unavoidably unsafe'.

There is a very rare risk that either of the children will ever catch one of the diseases listed in this report. Both children are thriving and have strong immune systems which definitely helps in protecting them from diseases. 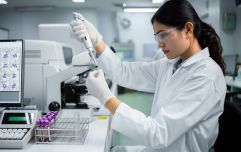 END_OF_DOCUMENT_TOKEN_TO_BE_REPLACED

However, the boys' father asked the court to order that both children should have all routine childhood vaccinations.

Judge Rogers’s ruling was made in December and published yesterday. The court order means that both children will be vaccinated against diseases including diphtheria, polio, meningitis, measles, mumps and rubella as they reach the appropriate ages.

Are anti-vaxxers entitled to make their own choices or are they putting others at risk? Let us know your thoughts in the Facebook comments.


popular
I tried 'slow parenting' for a year and I'm never going back
Say it isn't so: Workin’ Moms’ to end with Season 7
Musings: Now that it's summer, mums please get into the photos
The bodies of three missing children and woman found in Minnesota lake
Opinion: The obsession with routines and sleep training for babies is weird – and stressful
The most natural thing in the world? You've got to be f***ing kidding me
Expert says Cocomelon acts "as a drug" to kids' brains
You may also like
1 month ago
First case of monkeypox confirmed in Northern Ireland
1 month ago
Doctors investigating link between dogs and outbreak of hepatitis in children
2 months ago
5 people hospitalised after recent Kinder Salmonella outbreak
2 months ago
Growing concerns about illness that is a mix of chickenpox and scarlet fever
2 months ago
HSE asks parents not to send their children to school if they have rhinovirus
8 months ago
Mum issues warning to parents after her son is hospitalised with RSV
Next Page