The actress gave birth to her daughter Rani Rose two and a half months ago.

Pregnancy significantly changes your body and there's no escaping that fact. While some people lose the "baby weight" quickly, other women take a bit more time. There are so many different factors that can affect this from age to body composition to how soon after giving birth you can medically start exercising again if you feel up to it.

One of the HerFamily writers, Melissa Carton recently penned an honest article on how she feels towards her body since having two kids and it's something a lot of mums could probably relate to.

After giving birth in October, one celebrity mum seems very keen to get back to her pre-pregnancy weight.

So...here we go! The routine with our baby is getting more familiar and I’m ready to start taking a little time in the day focusing on myself. For me that means my health. Why? Because I wanna be around a long time for these three kiddos of mine. I know that some are curious about what that means and for all you moms (wether working or not working moms) it is the most challenging thing in the world to balance kids and personal time. Let’s be honest, kids take the number one position and it’s haaaaard to make the time for yourself. I’ve been doing a lot of research and I’ve spent my life time trying all kinds of new things that are focused on health and wellness. Because I am on a mission right now to get back to my fighting weight ;) and my strong body/mind back I want to bring you in on some of this journey. If you want to follow a more in-depth of my to-dos, @prettyhappy will be posting all kinds of fun tidbits from exercises we are loving to foods/recipes we ❤️ and meditation practices I just can’t live without ?‍♀️ MY GOAL: I will be shooting a film in the spring and I’m looking to shed 25lbs. I’d like to try new workouts and eat as healthy as I can. I wanna do all this and keep up milk production, raise my kids, work everyday, make time for my man, have girlfriend time and stay sane! ? I know that this sounds more like a new year resolution but after Thanksgiving and everyone thanking their health, I feel motivated to keep that up. Much love and hope everyone’s Having an amazing start to the holidays! ?

Thirty-nine-year-old Kate Hudson is already a mum to two boys from previous relationships, but Rani Rose is her first daughter with current boyfriend, Danny Fujikawa.

In an Instagram post last month Kate said she was "on a mission" to get her "fighting weight" back. She shared her goal with her followers:

"I will be shooting a film in the spring and I’m looking to shed 25lbs. I’d like to try new workouts and eat as healthy as I can."

The language Kate used made me think of an interesting point, why do we always describe losing weight in such radical expressions like "on a mission" and "fighting weight"? It's like a war against ourselves. 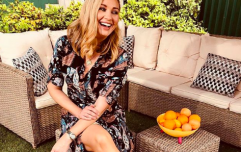 The Anna Daly column: Why I’m not going to be seduced by the insta-perfect home

END_OF_DOCUMENT_TOKEN_TO_BE_REPLACED

There's a litany of similar expressions like "blitz that belly", "kill it in the gym", "no pain no gain" and "be stronger than your excuses".

According to The Daily Mail, Kate has just been named Weight Watchers latest ambassador and people think she's an "unrelatable" role model having had "abs of steel" in between each pregnancy.

The How To Lose A Guy In 10 Days actress says she wants to lose the weight for health and wellness reasons, which is totally valid but my only point is that mums could be a little kinder to themselves after giving birth.

No need to be a drill sergeant, you literally just produced a human.


popular
Holly Willoughby just wore the cutest €40 dress from Marks and Spencer
The Toothpaste Experiment is something that all parents should do with their kids
My child came home from school with a tin whistle and now I have to move
Here are 6 beauty hacks to speed up your morning routine and make you look alive
Caitriona Balfe marries partner of three years, Tony McGill
20 Unisex Irish Baby Names That Are Absolutely Magical
22 short (but very sweet) one-syllable baby names that we adore
You may also like
4 days ago
The stunning €25 New Look top that will transform even the most ordinary outfit
1 week ago
Buckingham Palace announces the date and location of Princess Beatrice's wedding
1 week ago
We just love Holly Willoughby's gorgeous dress and it's from & Other Stories
2 weeks ago
You're going to need the Penneys dress that will solve all your spring wardrobe dilemmas
3 weeks ago
River Island's floral €60 dress is the first piece you'll want for your spring 2020 wardrobe
3 weeks ago
The €30 Penneys jumpsuit that could pass for a designer piece is in stores now
Next Page