With the help of his uncle, a young man has revealed what it’s really like growing up with autism.

James Kavanagh asked his 13-year-old nephew Sean a series of questions to raise awareness about the condition.

Sean explains that he has atypical autism before going into more detail about his daily life and giving some advice for those who don’t have autism.

He finishes off with a lovely message, saying: “Just understand that they’re different and they see the world in their own perspective.”

James uploaded the Snapchat video to his Facebook page and it’s getting a fantastic reaction with over 120,000 views and almost 4,000 likes. 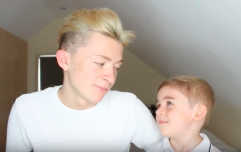 END_OF_DOCUMENT_TOKEN_TO_BE_REPLACED

Many people praised Sean for producing such an informative clip and for spreading awareness about autism.

One commenter wrote: “Omg he's an amazing young man well done great perspective on autism”. Another said: “Such an amazing kid and he explains it so well”.

One in 100 people in Ireland has Autism Spectrum Disorder. For more information about autism, please visit the Autism Ireland website HERE.


popular
Investigation into the discovery of a body of a male, Drumcondra, Dublin
Planning your next getaway? Here are 6 fun family activities to try this summer
This mum's post about dying to send her kids back to school is too funny
Tasha's dad responds to Jacques' Instagram video
Actor Anne Heche rushed to hospital after car crash
Musings: I think 'Lawnmower' parenting is damaging for children
Lauren Goodger assaulted and taken to hospital after daughter's funeral
You may also like
10 months ago
Steve from Blue's Clues tells Millennials he never forgot about them
1 year ago
Dad creates an exciting pirate adventure his little girl will never forget
1 year ago
Former ballerina with Alzheimer’s listens to Swan Lake and remembers routine
1 year ago
Husband records video of wife reacting to a child free day out and it's so relatable
2 years ago
WATCH: Meet 88-year-old 'Paddy Christmas' who has become a local hero for his festive lights
2 years ago
Mum sprays breastmilk into a crowd of party goers and other mums aren't happy
Next Page