These are strange days, and it's almost needless to say we are all learning lots about ourselves during this worldwide lockdown.

I mean; I thought I was a bit of a homebody, and, you know, I still would consider myself one, but darn; I do miss going out for brunch and yoga classes and meeting my friends for a glass of wine here and there.

I have also discovered that I actually do love going into my office – at least occasionally, because there is a lot to be said for having the chats with co-workers and having adult conversations during the day with people who you are not related to.

Another thing, it seems, many of us are only discovering now, is what are partners or spouses actually do for a living.

According to some new research by Virgin Media it was discovered that a whopping half of people in the UK had no idea what their other halves did during their working days - until now.

In fact, out of the 1,500 people surveyed, the extent many understood of their partner’s jobs were statements like 'they work in an office' and 'they have lots of meetings'.

However, the number of people feeling more clued up about what their partner does for a living has now dropped by half, thanks to our close working quarters. 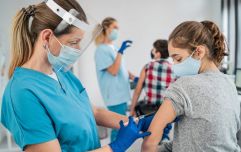 END_OF_DOCUMENT_TOKEN_TO_BE_REPLACED

Did this happen in your house?

According to the UK study,  as many as 32 percent of people would even now describe what their partner do as 'interesting'.

'With so many more couples now working from home, it’s funny how many people knew so little about what their other half did for a living - until now.

'Suddenly we’re spending working hours and downtime in the same space and it’s sure to be a learning curve for everyone – whether about the job roles themselves or their partner’s personality,' A Virgin Media spokesperson told Yahoo Style UK.

I guess the upside is that we'll never again wonder why our hubbies aren't texting us back during the day, as we now know their working schedule is actually pretty full.

popular
Andrew McGinley honours his children on their third anniversary
Infant boy dies in tragic accident in West Cork
Expert says Cocomelon acts "as a drug" to kids' brains
Barry Keoghan dedicates Oscar nomination to his baby son
Mum who lost baby after home birth claims maternity hospital failed to share medical details
The reason why babies usually say 'dada' first has been revealed
Woman fumes as mum charges per hour to babysit, including late pick-up fees
You may also like
1 month ago
"My heart sank": Tubridy hit with backlash over Toy Show remark
3 months ago
Leo Varadkar warns public to mask up as Covid restrictions debate returns
5 months ago
Covid-19 vaccine is safe for people during pregnancy
7 months ago
Dad's girlfriend complains he's spending too much time video-calling his child
8 months ago
Europe scraps mandatory face masks for air travel
9 months ago
Singer Dickie Rock heartbroken after losing his wife to Covid-19
Next Page