What's in a name? Did you change yours after marriage?

The first time I remember needing to explain my last name to somebody coincided with another major milestone: my first proper argument with an unreasonable dickhead.

I was five-years-old and some basic kindergarten b*tch (also five) had been calling me Katie MITTENS all damn morning. Naturally aggrieved, I calmly and politely explained to her that she was pronouncing it incorrectly. Having heard me out, nodding, she agreed. And switched to squealing "Katie Python!" at me instead.

My surname is not that unusual in the grand scheme of things (keep in mind there're Hadids and Kardashians and Varadkars to consider), but for some reason it's always been a source of lazy intrigue - people naturally refuse to pop it in the same easy, breezy phonetic category as the Matthews or the Nathans or the Nyhans. I was once called Katie MAYHEM in a doctor's waiting room. Which was awesome.

'It's Mythen. M-Y-T-H-E-N' I repeat to inquisitive taxi drivers and receptionists and pizza guys and other random strangers.

'Hmmm, yep I know, it IS very unusual, but there's loads of us in Wexford, apparently.'

Sure, my name was my identity (and my byline for 14 years) but it was also a nuisance and something I thought I could happily do without... until I began to seriously consider ditching it permanently during the run-up to my wedding.

The whole thing would have been much more straightforward if I was marrying some misogynistic ass hat who believed that a woman refusing to take her husband's name is an 'irreversible step towards a matriarchal goddess culture' (a real guy actually said that once).

But no, my beloved was prepared to go full feminist on it, if that was what I wanted. He even suggested we both use both last names, or choose a new name entirely, like Mr and Mrs Rock'n'Roll or the McBanes - amusing until you want to, you know, apply for a loan or something.

Surprisingly, the majority of Irish brides take their husband's name after they tie the knot. According to a survey by One4All, just 23 per cent of women keep their maiden name when the honeymoon is over. I guess for many women it's a no-brainer, particularly if your betrothed has a particularly sexy surname, or if you've always disliked your own, or if it really doesn't bother you either way. For all its complications however, I was beginning to find I couldn’t let mine go.

That in itself was weird. As a Scorpio, I'm more partial to reinvention than Madonna -I'm a sucker for change and transformation - why couldn't I muster the urge to leave the untidy little signature I’d used for 31 years in the dust? 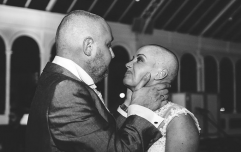 The reason this bride shaved her head is heartbreaking

END_OF_DOCUMENT_TOKEN_TO_BE_REPLACED

Perversely, while the idea of changing your name is an emotional rollercoaster, the actual act is crushingly mundane. There's no deed poll office to visit. You don’t even have to fill out a form to say goodbye to Old You. Traditionally, you just assume your husband’s last name after the wedding and off you go, as if the previous single you never existed.

In essence, nobody really gives a shit what your name is as long as you're not planning on committing any kind of fraud. This I found quite surprising, yet when I mentioned this to the registrar at the Notification of Intention to Marry she gave me a bored look and said 'Yeah, whatever.'

But I gave a shit. New Me wanted to share a last name with my husband, but I wanted to keep some of Old Me too. There was no 'O' to compromise on, as in the case of Chris O'Dowd and Dawn O'Porter (interestingly, only two per cent of Irish couples are in favour of this type of name blending). A meshing (say, Mr Pugh and Miss Griffin = Mr and Mrs Puffin) wouldn't work either.

Eventually, and after much soul searching (I was still thinking about it on honeymoon) I let my lifetime envy of fancy double-barrel hyphenated surnames win out. I went Full Married. I chose Mythen-Lynch.

It will cause no less consternation for me at check-in than plain old Mythen (more, probably) and it takes frikkin' ages to sign stuff at the bank, but it is 100 per cent New Me. Most importantly, not a drop of Old Me was spilled in the process.