Witnessing conflict: Is it ever a good thing to argue in front of children?

Conflict is inevitable in life. It's how we manage it that will impact our own wellbeing, as well as our children's.

In fact, witnessing conflict can contribute to a child’s social development. They learn to to deal with conflicts in their own life partly through observation, and are highly likely to imitate - consciously and subconsciously - what they see their parents doing.

It can be good for children to see their parents resolve an issue following a clash of opinion or an argument, as this will influence how they develop their own conflict-solving skills - either in the playground, or later in life with their own partners.

Experts agree it is the type of argument, rather than the frequency, that affects a child. From a child’s perspective, it is best when conflict is constructive because it has a productive outcome and is mutually beneficial. A resolution is sought and discussed, and there is shared decision making; it helps restore balance to the relationship and strengthens it in the long term.

Here, a child sees their parents disagree on an issue but express themselves calmly without shouting or saying hurtful things. Afterwards they agree on at least some of the points, then indicate in their own way - smile, embrace, say they love each other - that all is well.

Children should know that it is okay for people to argue as long as they are respectful to each other and try to find a way to solve the problem together. They should also understand that following a disagreement, you can show the other person that you still love/like/respect them. Let them know there are no 'winners' or 'losers' in arguments, just people working together to solve something they don’t agree on.

When a conflict is completely resolved, it may counteract the negative impact of exposure to conflict. The feelings underlying resolution are also important. If parents apologise with warm feelings, children see this as constructive; however, apologies are destructive when they are accompanied by negativity and lack of warmth, in which case children see through the action to the underlying feelings. The way in which an episode of conflict ends is very important from a child's point of view. 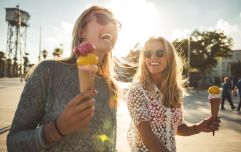 How To Control Emotional Eating: 10 Steps to Freedom

END_OF_DOCUMENT_TOKEN_TO_BE_REPLACED

It is also harmful when a child is constantly witness to destructive conflict. Children are extremely perceptive and will quickly pick up on the tone of hostility that characterises these arguments. Mudslinging, personal attacks and a lot of inflexibility with one person trying to defeat the other, or ‘win’ the argument, are very unhelpful to children. Exposure to this can cause real stress and put them at a greater risk of developing problems with adjustment behaviour.

It is important not to forget about the child in a conflict situation. Some children appear more vulnerable than others. Try not to focus solely on you and your partner; be mindful of the fact that every argument can impact on your child in some way. Rather than getting used to conflict, children become more sensitive or reactive to it as they experience more of it. Studies show that infants as young as six months can exhibit distress when their parents argue, so never assume your child is oblivious.

The overall message parents should take from this is that it can be beneficial for children to witness a constructive conflict that is resolved in a healthy and loving way. What matters is how conflict is handled and whether couples can ensure the negative ways of relating with one another associated with conflict do not outweigh positive ways of relating.

Dr Maeve Hurley, a former GP, is the Founder of Ag Éisteacht, a charity which supports frontline workers in the health and education industries in their communications and interactions with clients and patients.


popular
This amazing hanging egg chair is coming into Aldi next week and go, go go (but safely)!
The Dalkey house where Matt Damon stayed during lockdown will be available to rent again soon
Study states we all need to stop using 'time out' to correct bad behaviour
Unpronounceable Irish Baby Names That Will Leave You Scratching Your Head
Lidl is launching a new hyaluronic skincare range and the serum is only €3.49
Energia and GIY are giving away free grow boxes so you can start a vegetable patch with your kids
'Completely lost': Model Sarah Morrissey shares touching tribute to mother after recent passing
You may also like
1 year ago
What it's like going for IVF treatment the second time around
1 year ago
15 things that will happen when food shopping with the kids
1 year ago
Parenting battles: How to handle conflict in front of children
2 years ago
How to meal prep like a total boss, starting NOW
2 years ago
Sugar-free Christmas breakfast (or anytime) muffins
2 years ago
Ex-pat parenting: One mum on 7 BIG differences
Next Page