One mum took to social media yesterday to express her disgust regarding the Leaving Cert exams.

The Dublin mum said that her young daughter was due to take the exams but due to being incredibly sick in the hospital asked to take them after she recovered.

The anxious mum was told that this would be impossible and that if her daughter wanted to get her points for college she would have to take her exams while in hospital.

Tania McC posted the following message to Facebook along with photos of her daughter in the hospital.

"Just off the phone to Kelsey’s principal, & ms Mc Nally, because she’s too ill to do her leaving cert exams today and tomorrow, they ( board of education) will fail her on these subjects. The only option they gave her was to send an examiner up to her bedside and get her to do the test today!!

Even though she’s been given strict medical advice not to do anything that will impeed her recovery. To rest, and not to be stressed. She’s on a high dose of pain meds & strong antibiotics, she’s groggy and still in severe pain, hasn’t eaten in days, barely sipping water, and they want her to do the test regardless of the doctor in James’ hospital strict medical advice!!!!

She will now not get the points she needs to go to college, all her hard work down the drain!
To say I am disgusted in the board of education is an understatement!
They have caused Kel more stress due to their decision! Shame on them! Please share!!!! Students shouldn’t be treated this way!!" 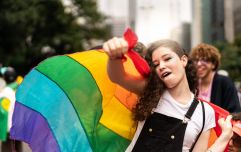 END_OF_DOCUMENT_TOKEN_TO_BE_REPLACED

Recently rules regarding children being able to postpone exams due to grief were brought in after a young girl was made sit an exam last year just hours after her mother died.

It is unclear as to whether or not these rules include ill children like Tania's daughter Kelsey.


popular
13 super sweet baby names many parents haven't discovered yet
Lockdown babies: Parents are opting for some very unique pandemic baby names
14 gorgeous baby names inspired by locations all over the world
The top baby names (so far) of 2020 are in – and we have spotted a trend
This jam drop cookie recipe will keep the whole family entertained (until they start asking for more)
"What a force you were": Tributes paid to Glee actor Naya Rivera
The 30 baby names that are going to be super popular in 10 years time

You may also like
3 hours ago
"What a force you were": Tributes paid to Glee actor Naya Rivera
1 day ago
UPDATE: Gardaí have found 23-month-old Jasmine Arshad safe and well
1 day ago
Katie Price's son Harvey taken to intensive care at risk of organ failure
5 days ago
Glee star Naya Rivera is missing after a boat trip in Southern California
1 week ago
Broadway actor Nick Cordero dies following Covid-19 complications
1 week ago
"I never thought it would be cancer": Stage 4 melanoma patient recalls receiving her diagnosis
Next Page