Britney claims Jamie Lynn's memoir is at her expense: "She never had to work for anything"

Britney Spears has accused her younger sister Jamie Lynn of promoting her new memoir "at my expense".

Britney has now spoken out about what her sister said in the interview, saying the Zoey 101 actress "never had to work for anything" and that she had always been "the bigger person".

Jamie Lynn has written her memoir, reflecting back on being a teen mom and the struggles she endured with her mental health in 'Things I Should Have Said'.

During the ABC interview, Jamie Lynn said she was always "my sister’s biggest supporter".

But according to the pop singer on Twitter, that wasn't the case.

She wrote: "I looked at my phone and I see that my sister did her interview to promote her book.

"The two things that did bother me that my sister said was how my behaviour was out of control. 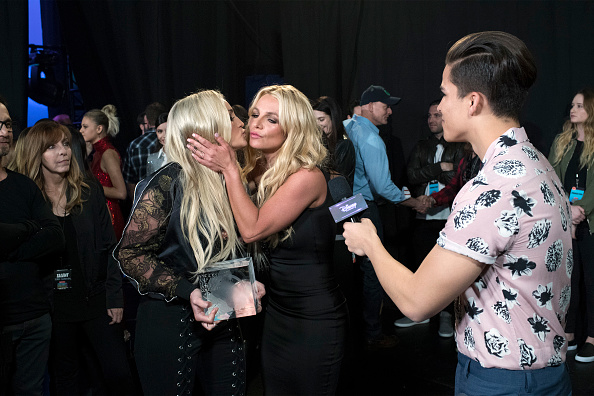 END_OF_DOCUMENT_TOKEN_TO_BE_REPLACED

"She was never around me much 15 years ago at that time…so why are we even talking about that unless she wants to sell a book at my expense.

"I wrote a lot of my songs and my sister was the baby. She never had to work for anything.

"Everything was always given to her.

"I always was the bigger person. They all got to do it and play me and I always sat there and took it.

"I do remember asking my sister why she did that when she knew I was waiting to change my show and her only words were "well, it wasn’t my idea’…"

She added: "Hope your book does well Jamie Lynn".

The pop star also admitted she is "disgusted" with her family and claimed they "ruined my dreams" and love "to pull me down and hurt me always".

Britney's conservatorship was terminated in November after nearly 14 years which had allowed her father Jamie to have complete control over her life and finances.


popular
Tom Cruise slated for "inappropriate" behaviour around Kate Middleton
What exactly is monkeypox and is it dangerous?
Rihanna fans slam Chris Brown for commenting on her baby news
10 hotels with self catering that are perfect for a family staycation
Gardaí investigating attempted abduction of 7-year-old boy
The Toy Show Musical looking for a young girl to star in lead role
Expert says Cocomelon acts "as a drug" to kids' brains
You may also like
1 week ago
Actress Michelle Williams is pregnant with her third baby
3 weeks ago
Kourtney Kardashian says she’s ‘grateful’ her kids witness her and Travis Barker’s PDA
4 weeks ago
Stacey Solomon is "embarrassed" about having a swimming pool because it isn't relatable
1 month ago
Britney Spears on her pregnancy anxieties: "I'm so scared to make a mistake"
1 month ago
Kim Kardashian reveals she didn't speak to Kanye for 8 months after filing for divorce
1 month ago
Jennifer Lopez details the moment Ben Affleck proposed for a second time
Next Page