"Divorce is difficult enough on our children..."

Kanye West has once again expressed his unhappiness at his estranged wife Kim Kardashian for allowing their daughter North to be on TikTok without his permission – only this time, she's not staying quiet.

Taking to Instagram on Friday, Kanye asked followers for advice on what to do about their eldest child being on the platform when he has made it clear he doesn't want her to be.

"Since this is my first divorce I need to know what I should do about my daughter being put on TikTok against my will?" the rapper wrote alongside a screenshot of 8-year-old North in a video from the TikTok account she shares with her mother.

He also tagged Kim, who filed for divorce from him last year, in the post. 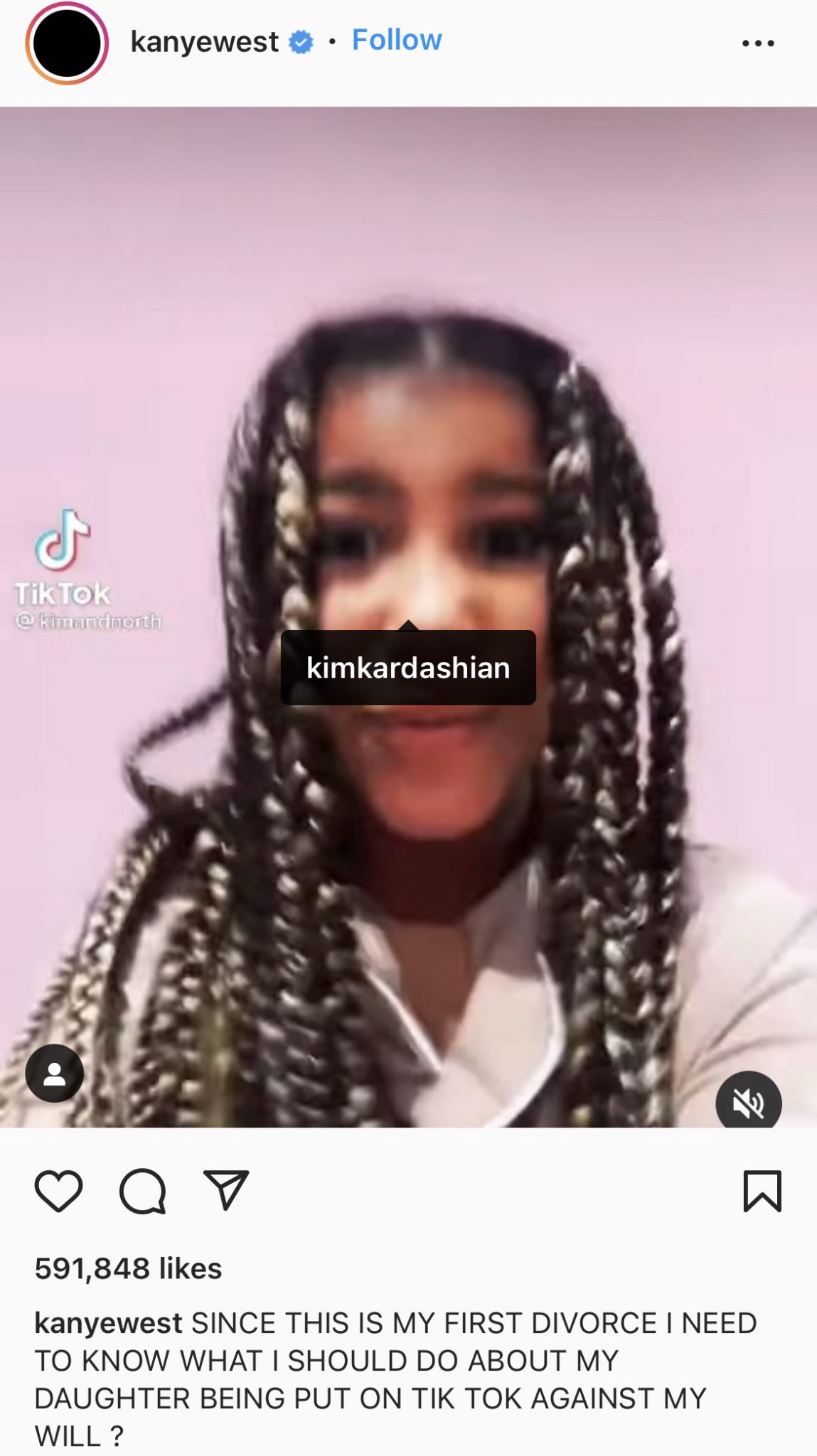 Kim then took to her Instagram Story to issue a statement on the situation, saying Kanye's "constant attacks" are "more hurtful than any TikTok North might create".

"I am doing my best to protect our daughter while also allowing her to express her creativity in the medium that she wishes with adult supervision – because it brings her happiness," she wrote.

"Divorce is difficult enough on our children and Kanye's obsession with trying to control and manipulate our situation so negatively and publicly is only causing further pain for all." 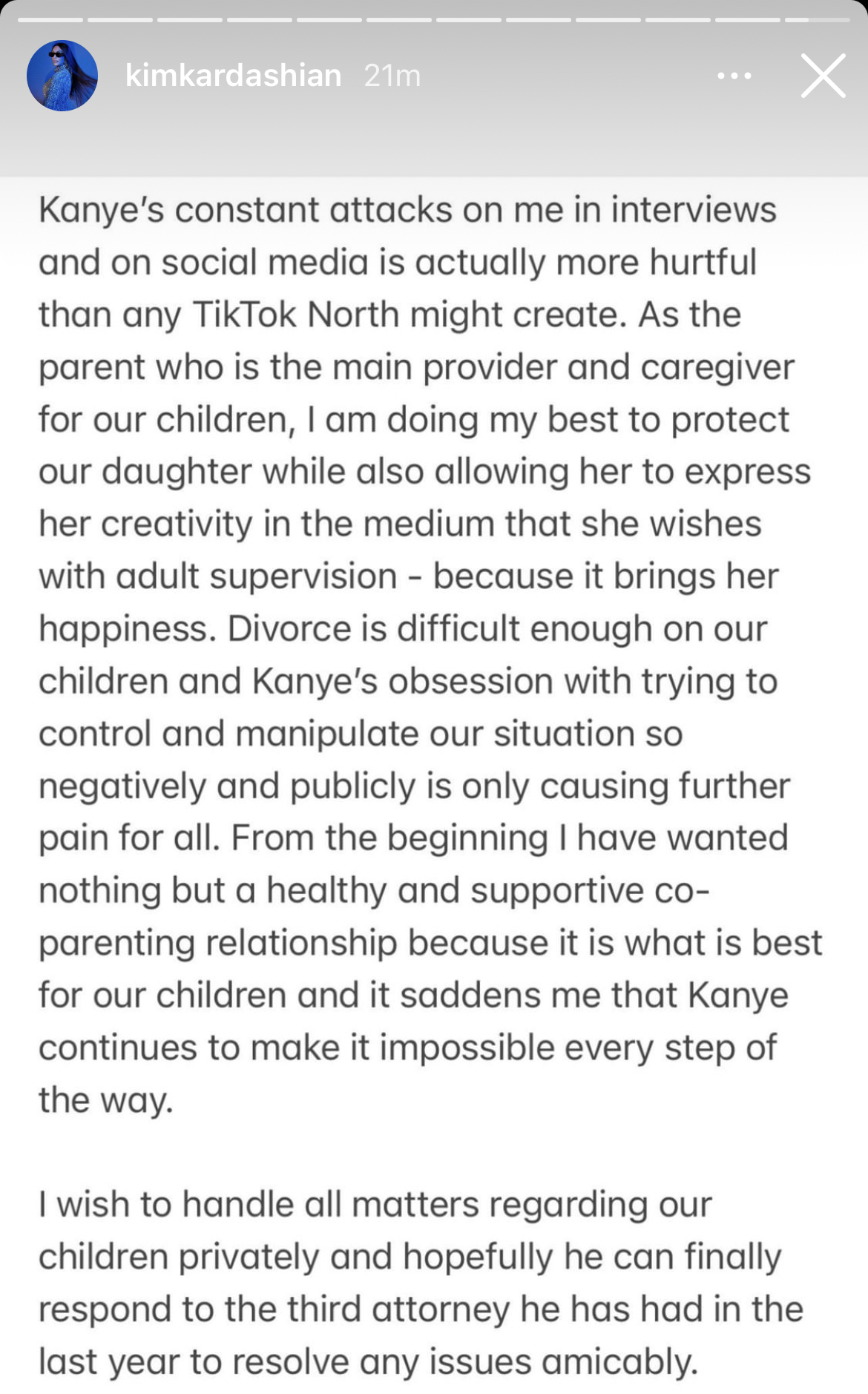 END_OF_DOCUMENT_TOKEN_TO_BE_REPLACED

The former couple's posts come a fortnight after the rapper sat down with Hollywood Unlocked and declared he did not want their kids on the social media app.

In the interview, the 44-year-old said he asked his two female cousins to speak with Kim about a number of issues they were running into while co-parenting North and their three other children, daughter Chicago, 4, and sons Saint, 6, and Psalm, 2.

"I said 'I want you to go and talk to Kim because I don’t want to talk to her and get into an argument,'" he shared. "There’s two things I said, tell her — security not gonna be in between me and my kids, and also tell her, don’t have my daughter wearing lipstick on TikTok."

Kanye was referencing an incident in which Kim's security prevented him from entering her home with North, as well as a TikTok where the 8-year-old lip-synced a scene from the Grinch while wearing makeup inspired by the Grinch's dog.

"And don’t have her on TikTok at all if I don’t approve that," he continued. "And I said it after it was done without me knowing. And then it happened again. So I feel like it’s poking the bear or trying to antagonise me or create this 'crazy' narrative."

He then went on to accuse Kim of playing games and gaslighting him when he publicly reacts.

popular
Woman shocked after spotting her dead husband in promo video for restaurant
Shock after baby is discovered alone in pram late at night in Dublin
HSE issues advice for parents if their child starts choking
Love Actually star reveals incredibly emotional behind-the-scenes story
Expert says Cocomelon acts "as a drug" to kids' brains
Britney Spears asks fans to respect her privacy after police call to house
What is chroming? Mum issues warning after daughter dies from dangerous trend
You may also like
4 months ago
Gigi Hadid's dad addresses those Leonardo DiCaprio dating rumours
4 months ago
Leonardo DiCaprio and Camila Morrone have broken up
5 months ago
Vogue Williams faces backlash after admitting she only wears clothes once
5 months ago
Gilmore Girls star Alexis Bledel splits from husband of 8 years
5 months ago
Mrs Hinch opens up about being Stacey Solomon's bridesmaid
6 months ago
Victoria Beckham reveals why she is 'terrified' of Harper using social media
Next Page