It seems there's no shortage of true crime on Netflix these days, and this week saw the streaming platform drop the trailer for their latest, which is titled Our Father.

The documentary tells the story of Donald Cline, a now-disgraced former fertility doctor, who used his own sperm to inseminate his patients.

The official synopsis from Netflix reads: "A top fertility doctor had a sickening secret: he was using his own sperm. Decades later, his ‘children’ band together to pursue justice."

Cline's medical licence was revoked by the Medical Licensing Board of Indiana in 2018 after it was discovered that he used his own sperm in at least 46 inseminations.

He pleaded guilty to two counts of obstruction of justice for lying about using his own sperm, and he was given a one-year suspended sentence in December 2017, but he never actually served any jail time.

The Netflix documentary sees the children of the mothers affected by Cline's actions - dubbed siblings by the show - share their story.

A top fertility doctor had a sickening secret: he was using his own sperm. Decades later, his “children” band together to pursue justice. Our Father is on Netflix May 11. pic.twitter.com/zaIuSu9ibv

One tells the camera: "Growing up, I felt different. I was 35 and I take a DNA test." 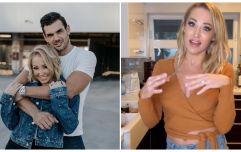 END_OF_DOCUMENT_TOKEN_TO_BE_REPLACED

A third continues: "All of these random names were popping up, and it said 'close family'. We all matched the name Cline. Right then, I knew Cline was our biological father. So that's when strange things started happening."

Another sibling reveals that they think Cline's actions were some sort of "sick experiment for him", while a different sibling points out the similarities between the children.

"Most of us have blonde hair, blue eyes. It was almost like this perfect Aryan clan. It's disgusting."

The trailer covers the affected families coming to terms with Cline's actions, as well as their scramble for justice.

Our Father lands on Netflix on 11 May.


popular
Study says that these childhood experiences can affect our health for life
Brad Pritt reveals he may have rare condition prosopagnosia
Should I let my 6-year-old daughter dye her hair?
2-year-old boy orphaned after losing both parents in Highland Park shooting
Planning a weekend away? Here are 5 fun family attractions to visit in Mayo this summer
Parents sue TikTok after their daughters die during 'blackout challenge'
Chris Pratt responds to backlash over 'healthy daughter' comment
You may also like
1 week ago
Netflix CEO confirms adverts will be added to the streaming service
1 week ago
Regé-Jean Page addresses those Bridgerton rumours
2 weeks ago
Regé-Jean Page could return to Bridgerton for season 3
2 weeks ago
Netflix Announces New Irish Production "Bodkin" To Be Filmed in Cork
2 weeks ago
WATCH: The first trailer for Blonde, the first adults-only movie made by Netflix
3 weeks ago
Entertainment: First look at STRANGER THINGS 4, Volume 2
Next Page