Natasha Richardson died after a skiing accident in 2009.

Liam Neeson reveals he visits his wife Natasha Richardson's grave every day to talk to her.

The Parent Trap actress tragically died after suffering a head injury during a ski trip in Canada.

Neeson says he keeps her memory alive by visiting her grave every day. He said he talks to Richardson like she's still here.

He previously told Inquirer, "I speak to her every day at her grave which is about a mile and half down the road.

"I go down there quite often, so I do speak to her as if she’s here. Not that she answers me."

Following her sudden death, Neeson issued a statement on behalf of his family. 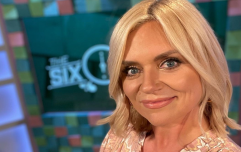 Karen Koster gets honest about the sudden death of her mother

END_OF_DOCUMENT_TOKEN_TO_BE_REPLACED

"Liam Neeson, his sons, and the entire family are shocked and devastated by the tragic death of their beloved Natasha. They are profoundly grateful for the support, love, and prayers of everyone, and ask for privacy during this very difficult time."

Richardson initially refused medical help after her accident because she felt fine.

However, hours after the accident, Richardson started to complain of a headache. She was transported to a hospital in New York but sadly died two days after her accident on March 18th, 2009. The actress was only 45 at the time of her death.

Doctors confirmed the late actress died from an epidural hematoma.

popular
Parents told to stop buying selection boxes for kids- here's why
People are realising what the red Christmas lights are actually for
Opinion: He may be a politician, but Leo Varadkar's personal life is none of our business
Expert says Cocomelon acts "as a drug" to kids' brains
Kelsey Parker: "People think I should be walking around wearing my black veil"
"Losing a baby is the ultimate loss, but to watch on over a video call is soul destroying"
4 ways to fix hard slime with ingredients you probably already have at home
You may also like
1 month ago
I think it's safe to say we'll all be holding our children a little tighter tonight
4 months ago
My mum died on my birthday and my dad won't let me celebrate it
8 months ago
85% of bereaved people say Covid negatively impacted their experience
8 months ago
"I need you most": Alexandra Burke finding pregnancy bittersweet without her mother
11 months ago
Stacey Solomon admits she feels "sad and guilty" over death of beloved dog
11 months ago
Micheál Martin opens up on the tragic passing of two of his kids
Next Page