This morning, when my alarm went off, I carefully had to peel my little boy's arm off my head (and his legs from under my pillow!) before I could quietly get up (and tip-toe out of the room, as to not wake him or his sister, who at some point during the night must have also snuck in).

This, to be perfectly honest, wasn't an unusual morning in our house. I don't think I can actually remember the last time I slept entirely undisturbed by children, having to carefully position myself around their sleeping, warm bodies as I crawl into my bed at night.

The thing is – this doesn't bother me. In fact, I will go as far as saying that I love having them there, knowing fine well that this phase of our lives isn't going to last forever, and chances are, I will miss it so very much when it is over.

'Night-time parenting' my own mum so beautifully called it – that idea that parenting doesn't stop at bedtime, because sometimes, they also need you at night – and I have chosen to stop listening to people who don't agree or who keep reminding me I'm 'spoiling them.'

The thing is, children who tip-toe into your bed to sleep at night are more likely to grow into secure, intelligent and confident adults, according to several scientific studies.

Yep, it's true – and clearly this might serve as some reassurance for parents: Kids who co-sleep report a greater satisfaction with life as they reach adulthood and report that they enjoy secure relationships.

The research report by Blair Tyler from Pacific University in the US found this was certainly true with males who had co-slept with their parents as children.

“Turning to a sample of college psychology students, a retrospective survey found that males with a history of sleeping with their parents had higher self-esteem, less guilt and anxiety,” says the study report.

Another research project by Robin Lewis and Louis Janda found that kids who co-slept with their parents reported that  “It always gave me a feeling of security to know that if I had a bad dream I could crawl into bed with my mom and dad.” 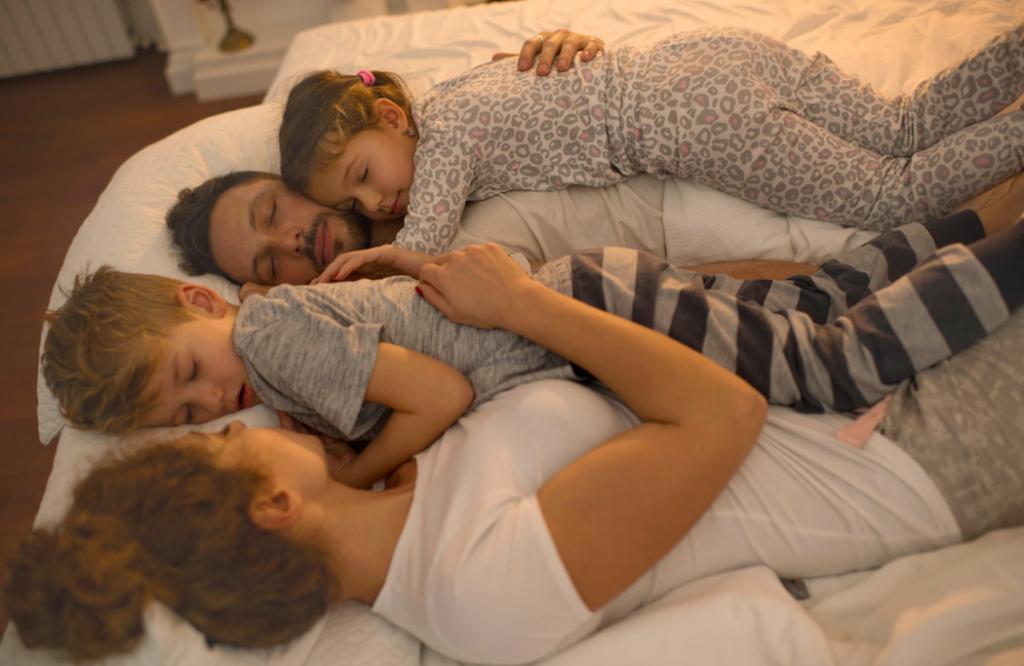 END_OF_DOCUMENT_TOKEN_TO_BE_REPLACED

Are your kids coming into your bed at night and you find yourself worrying whether or not they will ever learn to be independent?

Chill out, says James McKenna, Ph.D., director of the Mother-Baby Behavioral Sleep Laboratory at the University of Notre Dame.

The very act of co-sleeping can help kids become more independent and confident.

On his website he reported, "Recent studies are beginning to show [that]... it is not solitary sleeping arrangements that produce strong independence, social competence, feeling of high self-esteem, strong sexual identities, good comportment by children in school, ability to handle stress, but it is the social or cosleeping arrangement that contribute to the emergence of these characteristics."

McKenna adds, "A recent cross-sectional study of middle-class English children shows that amongst the children who "never" slept in their parent’s bed there was a trend to be harder to control, less happy and exhibit a greater number of tantrums."

So there you go, parents. Having your child come into your bed at night is, in fact, doing them all sorts of good. So you might as well just cuddle up and enjoy it – it won't last forever.

popular
Bride asks for divorce day after wedding following groom's disrespectful cake stunt
Police believe they know what happened to missing dog walker Nicola Bulley
Entrepreneur schoolboy has made £1,000 from selling sweets
Mum's photo of toddler's travel cot after it was cleaned will turn your stomach
Expert says Cocomelon acts "as a drug" to kids' brains
Identical twins trying to get pregnant at same time with shared fiance
Dad admits he hates his daughter's name so much it makes him uncomfortable
You may also like
1 week ago
Parents are banning grandparents from changing nappies to 'protect baby's privacy'
1 week ago
Is it time to get rid of children's bedtimes?
2 weeks ago
Expert reveals why you should never say "I'm leaving without you" to your child
2 weeks ago
"To all my friends with babies, I apologise."
1 month ago
Should I let my 6-year-old daughter dye her hair or is she too young?
1 month ago
Little girl heartbroken after only two people show up at her birthday for odd reason
Next Page