The Busted musician revealed he and his wife had banned the fast food chain on his podcast.

When it comes to parenting, celebrities are known for their unique or outlandish ways.

But one celebrity couple who are often praised for their honesty surrounding the parenting of their three children are Emma and Matt Willis.

The couple, who have been married since 2008, have managed to strike the balance between being open and sharing insights into their family life and ensuring their kids are out of the spotlight.

The pair are often praised for encouraging self-expression in kids Isabelle, eleven, Ace, nine, and Trixie, five. But while the kids have the freedom to be themselves, Emma and Matt have enforced one strict rule: no McDonalds.

The Busted musician revealed he and his wife had banned the fast food chain earlier this year on his podcast When No One's Watching.

"My kids have never had McDonald's," he told listeners. "It is the one thing they’ve never had and they’ll never have it.

"It's the one thing we have been like, 'Do you know what, I don’t want you thinking that is food. Plus you are going to get to an age where you eat it all the time. I know that at the moment when I can control what you eat I am not going to let you eat that stuff.'" 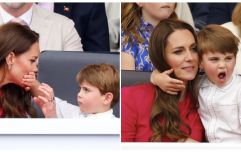 END_OF_DOCUMENT_TOKEN_TO_BE_REPLACED

While the couple might have strict rules regarding their children's food intake, they generally run a relaxed household where each child has the freedom to dress how they like.

Emma and Matt have been praised in particular for supporting son Ace's style choices, with Emma referring to the nine-year-old as her "little style icon."

The mam-of-three was surprised by both the praise and criticism the couple received for allowing their son to express himself freely, saying that for their family, it's just the norm.

In an interview with the Sun, she said: "He is very individual, he dresses the way he wants and he’s really happy doing that. Why would I try to suppress that?

"I see it as hair is hair, clothes are clothes and colour is colour. And, you know, if my son wants to wear a pink top, I'm certainly not going to stop him.

"Let kids explore. Kids love exploring. And they don't just have to explore in the dirt with worms and spiders, they can explore with colour and clothes and hair. I just let him be him."

popular
Bride asks for divorce day after wedding following groom's disrespectful cake stunt
Police believe they know what happened to missing dog walker Nicola Bulley
Entrepreneur schoolboy has made £1,000 from selling sweets
Dad admits he hates his daughter's name so much it makes him uncomfortable
Molly-Mae's nursery leads to spike in demands for replicas
Going on solo holidays is good for mothers, science says
Couple decide to live on cruise ship permanently after finding it's cheaper than paying mortgage
You may also like
9 months ago
Alicia Vikander says she "struggled" in lockdown as she "tried to get pregnant for a while"
11 months ago
I share a bedroom with my kids – and so do Kristen Bell and Dax Shepard
1 year ago
Hilaria Baldwin says Alec "shushed" her when she was in labour
1 year ago
Kourtney Kardashian claps back at critic who says she's "finally" with her kids
1 year ago
Stacey Solomon shows off baby Rose's adorable first Halloween costume
1 year ago
The Met Gala was the ultimate mam's night out
Next Page