This one might be hard to believe if you're sleep-deprived and up to your elbows in nappies and Milton, but a new survey has revealed that the majority of new mums have never felt healthier.

Eight in ten new mums polled by Mamas & Papas reported that having a child has had a positive effect on their own wellbeing.

The research found that prior to parenthood, most women would think nothing of eating ready meals and takeaways, and putting their feet up in front of the TV after a long day at their desk.

However, as soon as their baby starts weaning, mums’ focus turns to providing nutritious, healthy meals to be shared by all the family. Rather than spending hours sitting down, mums are rushing around after their little one and pounding the pavements with the buggy for hours.

The poll of 2,000 mums, found 73 per cent were more relaxed about what they ate before having a baby. Fifty-six per cent also admitted to buying more fruit and vegetables for pureeing, leading to eating more themselves because items were in the house.

Six in 10 mums wanted to make sure everything they made for their children and the family was healthy and nutritious, and as their child got older 52 per cent made sure they ate the same foods to set a good example to their child. 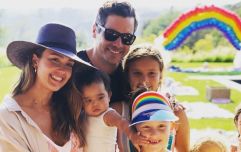 END_OF_DOCUMENT_TOKEN_TO_BE_REPLACED

A third of mums simply said their priorities changed after the birth of their baby, and being healthy was now far more important than it was before. In keeping with the baby’s routine, a third of mums found themselves having more regular mealtimes and more healthy snacks in between.

The study also shows new mums exercise almost three times more than they did before having a child. After having children, women who previously spent an average of two hours and 45 minutes a week exercising now do up to six hours of exercise a week.

Six in 10 mums make more of an effort to go to the gym, go out for a run or attend exercise classes, and in addition, will walk around the neighbourhood with the buggy for an additional four hours and 22 minutes each week.

Tell us, do you feel healthier since you became a mother? Let us know on Twitter @HerFamilydotie.

popular
Childcare fees to be reduced by up to €170 per month
Budget 2023: Parents will not have to pay for primary school books from next year
Coronation Street star Lucy Fallon pregnant after miscarriage heartache
Breaking is the haunting novel parents need to read this October
Parents told to prepare for two-year-long creche waiting lists
Smyths issues warning to parents ahead of Christmas
6 unusual and unique family-friendly activities to try in Ireland's Hidden Heartlands this autumn
You may also like
1 year ago
These new fitness kits include everything you need to get fit and strong at home
1 year ago
Get moving this April and raise funds for a good cause with Focus Ireland's virtual marathon
1 year ago
Getting fit at home: Personal trainer Ben Walker on how to kickstart your fitness this January
2 years ago
H&M launches brand new surf collaboration collection – and we're ready to hit the waves
2 years ago
Girl power, goals and gut health – we caught up with Maeve Madden ahead of her upcoming Dublin boot camp
2 years ago
WIN a family adventure worth €500 to challenge yourself and the little daredevils
Next Page