Losing your child is every parent's worst nightmare.

For Dublin mum Jackie Fox, the nightmare became reality last year when she discovered her daughter Nicole after she had made an attempt on her life in their home. Nicole later passed away in hospital surrounded by those closest to her.

Nicole, known to her family and friends as Coco had suffered years of mental and physical abuse and since her daughter's death, Jackie has campaigned the Dail to bring in a law that holds bullies accountable for their actions.

During the week I met with Nicole's mother to talk about her life and the soon-to-be Coco's Law. 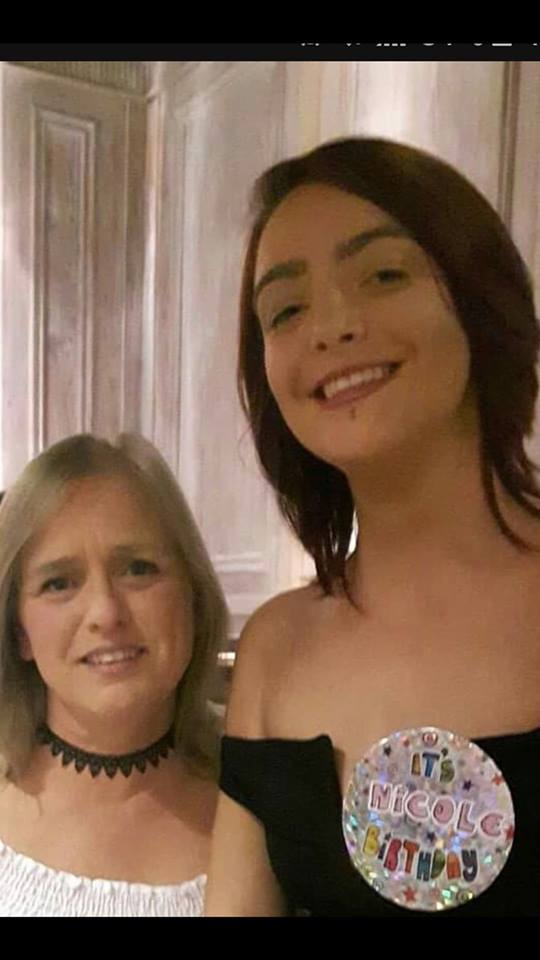 The living room that we sat in was adorned with photographs of Nicole. From baby photographs to some photos taken only a couple of weeks before her passing it was a beautiful and heartbreaking tribute to a life taken too soon.

"When Nicole was younger she was just your regular happy-go-lucky child. She had friends, she was cheeky, she loved to sing and dance. It wasn't until she was around 17 that things started to change. It started off with two girls picking on Nicole. They never left her alone. Even if she stopped going to the discos that they where at they would find out where she was going through social media and follow her to bully her.

They pretended to be her friends. I kept telling her that they're not your friends but she was very trusting. Things only got worse from there. One of the girls set up messaging groups and got more people involved in harassing Nicole. One time she had cigarettes put out on her which left a scar on her arm. Another time a boy got her by the hair in a nightclub and dragged her down a flight of stairs. If she would put a drink down on a table they would come over and swipe it off. They'd pretend to dance beside her and elbow her in the face and in the chest. They never left her alone." 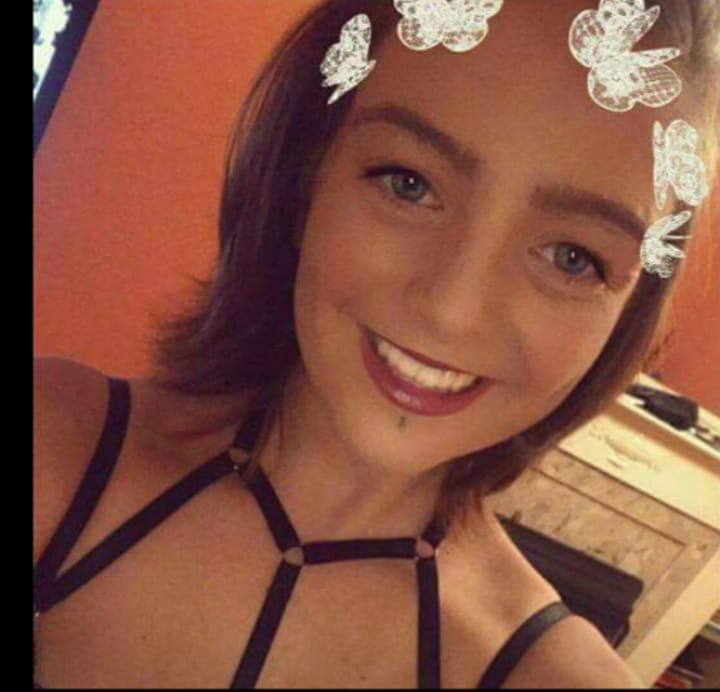 "She only went out once a week but I would beg her not to. She had every right to go out and enjoy herself but I was frightened for her. When she would be getting ready to go out she would be throwing up in the bathroom with nerves, her stomach would be in knots.

When she would finally get all dressed up she'd say mam take a picture and she'd go out pretending everything was fine and that they weren't going to get the better of her. When she would go out I wouldn't go to bed and she'd call me, could be 1 am and she'd say quick mam come and get me. She rarely got to stay out even that long because they would be out to get her."

Last year Irish band Keywest created a video called Coco's Story which featured reenactments of some of the abuse Nicole suffered at the hands of her tormentors.

Even at home, Nicole wasn't safe as her abusers started to target her through cyberbullying. Nicole's mother Jackie still has screenshots of the messages written about her daughter encouraging her to kill herself.

"There was a Whatsapp group. Messages were going into it saying, go die, go hang yourself, drink bleach, everyone hates you, no one wants you around. She never responded to any of these messages but it did get to her.

In 2015 Nicole took an overdose. I thought it would stop after that. I thought they would realise that it had gone too far but it only got worse. They were all trying to claim like a trophy who caused her to take the overdose. They were delighted with themselves. A fake page was set up that sent Nicole messages telling her they would beat her up and leave her on a life support machine. I went to the Gardai but I had no idea that it wasn't an offence at the time to cyber bully.

She started to self-harm, she would cry every night going to bed. I would try to cheer her up with day trips to Bray or Liffey Valley. She loved McDonald's. I used to give out to her saying you can't keep eating that rubbish but we'd always end up going. But it was getting too much for her. She eventually said to me that she didn't want to be here anymore, that she wanted to die. What do you say when you hear that?

She told me that the only reason that she hadn't killed herself was that she didn't want to leave me heartbroken. She tried so hard to hang on, she hung on for two and a half years."

January of last year Jackie returned home to find her beloved daughter barely alive after she had attempted to hang herself in their home.

"On the 18th of January I returned home from collecting my 14-year-old son Lee from school to find Nicole hanging in the hall. I grabbed her legs trying to hold her up and screamed for her brother to take her down. We rang the ambulance. I held her and begged her to hold on. She took a heart attack on the way into the hospital and suffered extensive brain damage.She was put on life support. Her tormentors got their wish.

I got two days with her in the hospital to tell her I loved her and hug her and kiss her. On the 20th of January she slipped away. My only comfort was the thought that at least they can't hurt her anymore. She was finally free of them."

Since losing Nicole, Jackie discovered how little protection there is for young people suffering online abuse and was shocked. She couldn't believe that there was no law preventing cyber-bullying and in particular bullying that leads to a victim taking their own life.

Spurred on by wanting to make sure that no other parent had to suffer the loss of their child the way she had Jackie began to campaign at the Dail to change the law so that bullies will be held accountable for their actions.

"Nicole died in January and in February I thought well I can either stay in bed and cry or I can try and do something about it. It kept me going. I went to the Dail, didn't know what I was doing, hadn't a clue, all I knew was that there was no law and I wanted to change that.

At first, no one was listening to us. I held a protest outside of the Dail which a lot of people came to then I had a meeting in the AV room in the Dail. I played the video that Keywest made for all of the TDs from the different parties. Eoin Ó Broin of Sinn Féin put me in the direction of who I should be talking to and where I should be going. He put me in touch with Brendan Howlin who had already tried to bring in a similar law. I had a meeting with Brendan saying that I've been marching for Coco's Law. I said that I'd love her name mentioned somewhere in the law to which he said that her name would be in the heading.

Coco's law has been through the first and second stage and is now in the middle of the third stage. Leo Varadkar said that it will be funded. Nobody is opposing it and they're actually in the middle of putting it together. Once it's put through it will now be a criminal offence threatening, bullying, revenge porn or doing anything that would cause another person to self-harm or kill themselves. The punishment could be up to seven years in prison. Brendan Howlin wants it out before the summer break up in June but even if it comes out by the end of the year it'll be great." 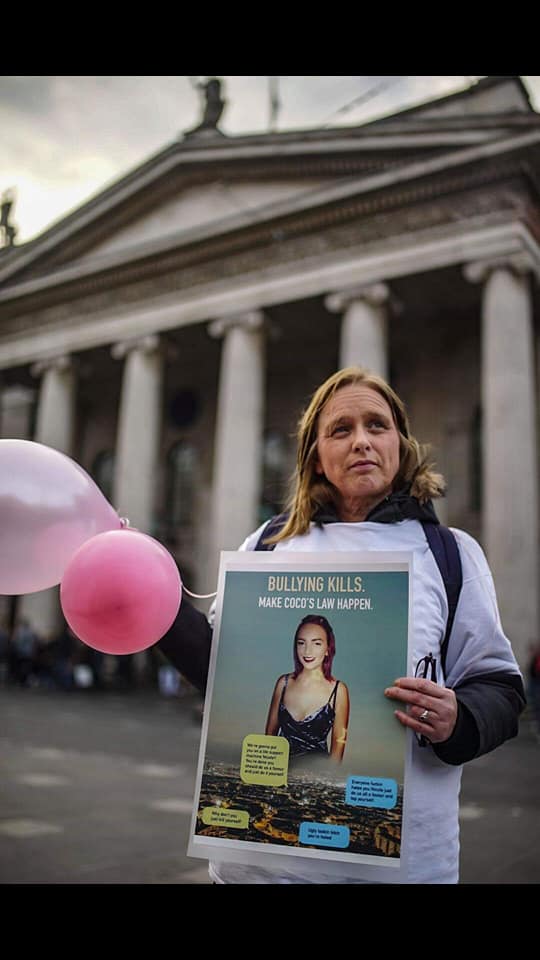 "When the law comes in it will be bittersweet. It will be great for other families but it's not going to bring my daughter, my Coco back.

Cyberbullying is not highlighted the way that it should be. It only takes a minute for a rumour to be spread around the internet and that's it everyone can see it. When Coco's Law is finalised it won't just be for kids but for anyone suffering from harassment. It's for everyone.

I think social media channels need to be held accountable as well because they have the power to remove things from their sites and shut down accounts but they don't. Kids are getting younger when they start using social media and it's important for parents to monitor what they're reading and what messages are being sent to them. If your child starts receiving online abuse, screenshot everything because once Coco's Law comes into effect you'll be able to use it as evidence."

As well as the new bullying law, Nicole's image and information are given to everyone buying an Eir phone which was launched as part of Safer Internet Day 2019. 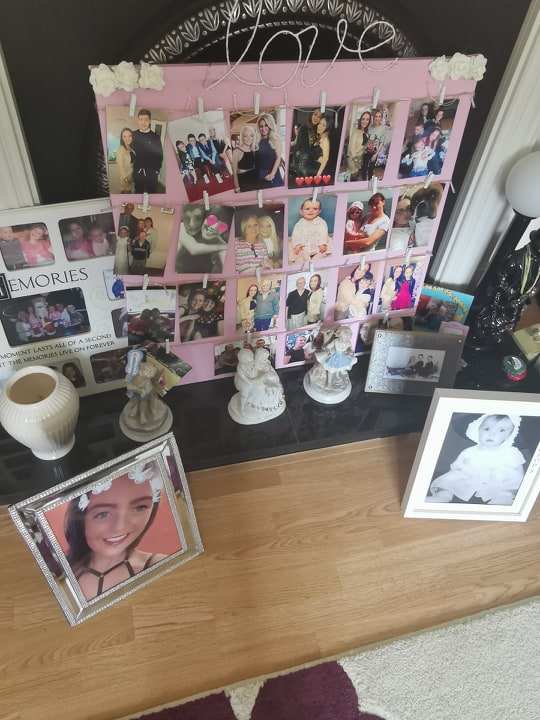 While Coco's Law will help to save lives, for Nicole's family it has come all too late.

"It's going to be a cold comfort when it comes out. There's been so much devastation left behind. We're destroyed. I've often woken up in the night and I can hear her brother crying in the next room. I'd go in and he'd be looking through photographs of them together. He's heartbroken. He sometimes feels guilty if he goes out to play with his friends and enjoys himself and I tell him not to, Nicole would want him to be happy.

It seems like forever since I've seen her smile or heard her laugh. I'd do anything to get another text from her or bring her to McDonald's. She was my baby, no matter what age she was, she will always my baby and I just wanted to always have her with me. I had her cremated because I didn't want to leave her in a graveyard on her own, I wanted to take her home. If I got the chance to see her again I'd just hug her and never let her go."

Jackie says she would describe Coco's Law in one word, hope. Hope for people trapped in desperate situations that they feel they can not break free from. Hope of escaping abuse. Hope of being free.

While the new law will help create an avenue for victims to seek help more work still needs to be done to educate young people in online safety and how to look after their mental health and well-being should bullying occur.

For more information on Coco's Law, you can follow Jackie and her progress on the Let's Bring in Coco's Law page.