Our bed has been hijacked by a four-year-old, help!

Our four-year-old son is a shit sleeper.

He didn’t start out that way; in fact, he was a really good baby – always smiling and laughing and we had him in a pretty good routine so he slept soundly for most of the night.

Then we started him in a crèche when he was one, and he picked up every germ going from the get-go. We had fevers, chest infections, ear infections, hand foot and mouth (yes that really IS a thing, I thought they were taking the piss out of me), you name it.

We did that thing that everyone said we shouldn’t do… we let him into our bed.

Well, he was only one and he was my only baby and I did feel terribly sorry for him, and wanted to mind him. But then he got used to it, that comfort of us sleeping next to him, I guess, and now he’s three and he’s STILL. IN. OUR. BED. We’ve tried everything – reward charts, Santa threats, the lure of Spiderman sticker books and Milky Bars at 3am, but to no avail. He starts out in his own bed just fine but at some point during the night, he slips in under the covers beside me so quietly and gently that I’m blissfully unaware.

That is, until he assaults one of us during the night.

If the phrase ‘Woken By Toddler Headbutt’ means anything to you, we may just form a support group now and become survivor pals for life. As Jacob’s mother, I have woken up to a bloody lip and nose courtesy of the superhero-like strength of the back of the child’s head….not to mention the countless kicks to the crotch area that both Ass Monkey and I have endured

Now that he’s four, he has found a way to turn himself upside down in the bed so that his feet are on our pillows as he sleeps. Ass Monkey was heading out extra early to work one morning recently and woke me to say goodbye. 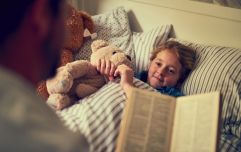 END_OF_DOCUMENT_TOKEN_TO_BE_REPLACED

“I’m off,” says he, once I’d stopped being outraged that a GROWN ADULT was waking me up before the actual children. I mean, what the..?

“Umph roys…what ish…?” I looked to him for answers. Why couldn’t I speak? Had I had a stroke while I slept? Did I have conjunctivitis IN MY MOUTH?

Today, I have a full force headache for the entire day, as I have a vague recollection from last night, of not only a foot in the head at some point, but also of a headbutt. A front headbutt. That’s new. This is WAR.

Does your toddler beat you up in their sleep?! Let us know in the comments!


popular
Parents build two tiny homes on their property for their teenagers to live in
Brides-to-be! The €50 Zara dress that's perfect for day two of a summer wedding
The gorgeous Penneys trousers that are a must-have for your workwear wardrobe
I'll be tired in the morning, but as a mum I stay up late to get some time to myself
The floral River Island dress that will instantly update your wardrobe for spring
Lost Girls is the Netflix drama we're all going to be hooked on next month
Positive parenting: Kirsten Bell's advice for handling tantrums makes a lot of sense
You may also like
12 hours ago
Study finds mums with five kids sleep the most and we need to know more
3 days ago
The giant family bed that is perfect for parents who just co-sleep (and we want one!)
2 weeks ago
Mums and dads lose the equivalent of 50 nights of sleep in their baby's first year, study finds
3 weeks ago
Waking up tired? These 5 houseplants will help you get a better night's sleep
3 weeks ago
Ready for bed: 3 amazing buys for your best sleep ever
4 weeks ago
The super simple trick that might be the key to getting your baby to sleep more at night
Next Page