Sleep is the Holy Grail to most parents, and the battle to get enough of it is a constant source of stress – and (let's be honest!) bickering.

At our house, the lack-of-sleep monster usually rears its ugly head by Thursday (or sooner...), when three days of early starts combined with two children who wander in around midnight, keeping us semi-awake from then on out, starts to take its toll. (Moving into the guestroom usually has little effect, as one - or both of them - always find me, the little bloodhounds!)

We all know feeling knackered is a common result of staying up too late, but did you know your body has plenty of other ways of letting you know you need to catch more shut-eye? It doesn't matter whether it is the kiddos or the latest Netflix-gorge keeping you up at night, if you are prone to any of the below problems, you need to get to bed earlier.

If you can't stop eating (anyone say midnight munchies?!), don't be so quick to put it down to that missed breakfast or the run you went on last night. There is a big chance you are just tired.
According to research by the Society for the Study of Ingestive Behavior, lack of sleep is linked to higher levels of the hormone ghrelin - also interestingly the very same hormone that triggers hunger. So put that bowl of cheerios down and go to bed.

2. You cry at EVERYTHING

It is totally normal to shed a few tears at the likes of One Born Every Minute (Surely that's not just me?!) Or your toddler scribbling on the brand new dining chairs with permanent marker (that actually happened). But if you find yourself weeping over every TV ad, puppy picture or minor discussion with your other half over dishwasher-emptying (happens too), you might need to look at your bedtime.

While we might be quick to blame the aul' PMS for our tears and tantrums, it might be something as simple as lack of sleep sending your emotions into overdrive. According to a 2007 American study, sleep-deprived brains were a whopping 60 percent more reactive to negative and disturbing images and thoughts. 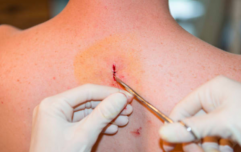 END_OF_DOCUMENT_TOKEN_TO_BE_REPLACED

"It's almost as though, without sleep, the brain reverted to more primitive patterns of activity," Matthew Walker, senior author of the study, said in a statement. "In that it was unable to put emotional experiences into context and produce controlled, appropriate responses."

Find you have trouble remembering where you put the keys again? Or the debit card pin code? The good news is that you are probably not bordering on dementia, you just need to sleep more. According to WebMD, lack of sleep can bring on a whole host of cognitive problems, from difficulty focusing and paying attention to confusion, lower alertness, forgetfulness and even troubles with learning new things.

4. Your sex life is in a slump

Oh, we have all been here, haven't we? But the solution is probably a lot less drastic than you think, and doesn't need to involve either 50 Shades-like role-play or expensive Agent Provocateur. (Unless that's what you're looking for, of course!). Just go to bed on time. Sleep enough, and watch the magic happen. Because according to a study published in Everyday Health, both men and women who don't get their 40 winks experience a decreased sex drive and less interest in getting frisky with their other half in general. A lack of sleep can also lead to higher levels of the stress hormone cortisol, which probably isn't helping on that loving feeling either.

5. You can't shake that cold

Many of us tend to blame the unpredictable Irish weather or even the kids, little germ spreaders that they are, for our never-ending colds and coughs. But if you find yourself unable to kick the constant sniffle, you might need to take a long hard look at your bedtime too. According to a 2009 study, people who sleep fewer than seven hours a night have almost three times the risk of catching a cold than people who slept at least eight hours.


popular
Doctors were shocked to find baby boy born clutching his mum's contraceptive coil in his hand
Unstructured play is vital for kids, so we need to stop entertaining them
RTÉ is hosting a Late Late Toy Show singalong this month and the kids will love it
The 30 baby names that are going to be super popular in 10 years time
Glee star Naya Rivera is missing after a boat trip in Southern California
H&M to close 170 stores this year due to dropping sales
Bedtime confession: I lie down with my children until they fall asleep - every night

You may also like
2 days ago
The new Covid-19 tracker app is live - here's how to use it
1 week ago
Toddlers are happier with fewer toys, study finds
1 week ago
'Tasting Trays' might just be the perfect solution if you're dealing with a picky eater
1 week ago
It's swimsuit season – and one mum's beautiful reminder is one we all need to read
1 week ago
Reese Witherspoon drinks the same smoothie every single morning – and here's why
1 week ago
The very simple trick that'll get your child to eat broccoli (and other green foods)
Next Page