“You need to come and get your daughter, there has been an incident, she needs to go home."

Unless you are a parent, you will have no idea how scared these very words will make you.

Which is exactly what happened to Australian mum Adrienne, who received this very phone call from her eight-year-old daughter's primary school recently.

Racing to the school in a panic, the Perth mother didn't know what she would find once she got there – but what she did find, was, I think it's safe to say, not what she expected.

8-year-old gets her first period in school

Speaking to Kidspot, Adrienne explained that she found her daughter sitting calmly in a chair, waiting for her.

Her daughter then explained that she had gotten her period – and upon alerting her teacher to this, he had actually passed out realising what was happening.

“I then noticed her teacher... laying there, he looked white as anything and had his eyes tightly closed. I had no idea what had just happened.”

Adrienne explained that as her daughter had actually had a small bleed last year, aged only seven, she had made her a period kit with pads and wipes and clean underwear to keep in her school bag. However, on this fateful day, her daughter had forget to bring it.

“So when she came back into class, she walked over to her teacher and casually said to him ‘Can you help me please, I just got my period and I kind of bled everywhere'," Adrienne explained.

"Well, my daughter reckons he jumped out of his chair to attempt to help, panicked when he saw her bleeding, grabbed his head with both hands, and then collapsed.”

"Periods shouldn't be a taboo topic to talk about" 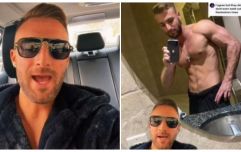 "If my wife lets herself go after childbirth, I'll leave" US podcast host reveals

END_OF_DOCUMENT_TOKEN_TO_BE_REPLACED

Adrienne also explains that when she had arrived at the school to pick up her daughter, and spotted her teacher flat out, the office ladies had filled her in on what had happened.

“I just couldn't contain it, I started laughing,” Adrienne says.

“We went home and sorted her out she didn't go to school for a few days but when we returned to class, he sheepishly came over and said, ‘look I have no idea what happened, I just panicked... is she OK?’

“I explained it was fine - he said, ‘yes thank you’ and never made eye contact with me again after that.

“I just never expected someone to panic and pass out over a period. We are a pretty open family and I honestly didn't realise that it is still quite a taboo topic to talk about when it really shouldn't be."


popular
State fails in appeal to jail man for assaulting his four-month-old daughter
Parents of UK teen kidnapped & left paralysed by boyfriend furious at "lenient" sentence
Expert says Cocomelon acts "as a drug" to kids' brains
Jason Momoa says he's "so proud" of stepdaughter Zoë Kravitz after Lisa Bonet split
Whether you’ve got a baby on the way or have an army of your own, the Lidl Big Baby Event is here to help
Janet Jackson addresses decades-long rumour she secretly gave birth in the 80s
No definitive plans to lift remaining maternity restrictions in Irish hospitals
You may also like
1 week ago
Not every parent will agree with this mum's stomach bug hack
2 weeks ago
WATCH: Man tries on pregnancy bump and literally cannot function
2 weeks ago
Baby Shark becomes first video ever to hit 10 billion views on YouTube
2 weeks ago
Representation matters: Toddler delighted by Disney character who looks like him
2 weeks ago
"I sit in her bedroom when she’s not with me" – the raw truth about co-parenting
2 weeks ago
A woman has gotten legally married to the colour pink – yes, really
Next Page