Every night going to bed I have the same optimism, tomorrow morning will be different.

Tomorrow morning will be the morning that everything will run smoothly. I have packed the bags and laid out the clothes. I have set the alarm for half an hour early. I won't be late for the minder, apologising profusely and trying to pretend that she isn't looking at me like she would like to (understandably) hurt me. Tomorrow morning will be calm and relaxed and EASY.

10 stages of getting out of my house (when it devolves into Hell-Morning):

4.30 am My son is awake, dancing on my face as I plead with him to go back to sleep. This is the first unmistakable indicator that hell-morning is just hours away. The 4.30 wake up call usually means I will be hitting the 'snooze' button about 48 times thus losing that early edge on the day that I was about to have.

7.05 am After extensive negotiations I succeeded in getting The Child back into the cot, however now he is dragging a battered tin cup along the bars and chanting his own unque chant – it's time to get up.

7.34 am The early morning giggles and cuddles come to an abrupt end when I suggest a dry nappy. I know, I know outrageous to think that lounging in a soaking nappy might not be that pleasant. The screaming begins in earnest, where's the coffee?

7.48 am The dressing-arbitration is well underway with me resorting to any means necessary to wheedle and cajole him into clothes. I crouch poised and ready just behind his bedroom door holding a tee shirt and waiting for him to parade past shirtless and proud, so I can POUNCE and jam it over his head before he can do anything about it.

8.05 am I am in the shower attempting to wash my hair and face and body and brush my teeth and take last night's makeup off all in one intense multi-tasking undertaking. The Child proceeds to trash the bathroom, upending the bin all over the floor before standing directly outside the shower curtain shouting 'Muma' 853 times in a row. "I'm coming," I say with increasing frustration. DO. NOT. SHOUT. I tell myself as the eye-twitch sets in.

8.15 am I am getting dressed while The Child points and laughs at my admittedly weird looking body. The mood is becoming tangibly more and more tense with each passing minute. "Maybe YOUR breasts would resemble a pair of sad, empty sports socks too if you'd spent six months having the life sucked out of you," I erupt, sounding fairly insane, hell-morning is definitely starting to get to me. 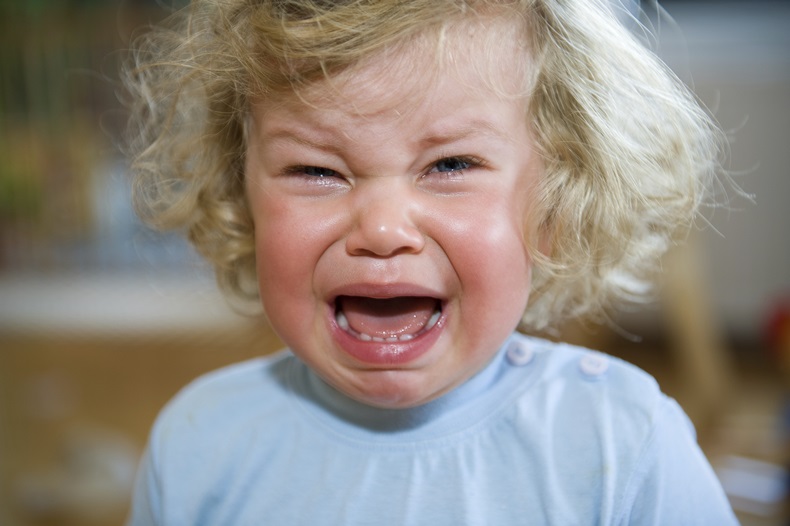 END_OF_DOCUMENT_TOKEN_TO_BE_REPLACED

8.22 am I have put The Child in front of a bowl of Weetabix, in order to plaster my face with makeup with one hand and blow dry my hair with the other. The Child's silence is ominous, but I'm too late/stressed/deep into hell-morning to care.

8.24 am The Weetabix was a MISTAKE. Oh my god how did he get it on the ceiling? Is that Weetabix down his pants???

8.27 am Operation Hose Child Down Complete. Now to exit the house. Operation Fling Absolutely Everything in the Bottom of the Buggy is underway with seconds to spare. "We're gonna make it; we're gonna make it," I think as the door shuts behind me. And then. "Oh God did I leave the oven on?" "No," I try to reason with myself, "you didn't even turn it on this morning." "But what if it's still on from last night?" "Don't you think you would've noticed?" "I dunno, I seem to have forgotten to put a bra on so...." The internal battle rages on until I eventually relent and trudge back inside to check that the oven is indeed stone cold.

8.34 am We're f*cked now, he's late for the minder, I'm late for work. We're jogging through the shortcut to the minder's house. The baby's bag is bashing me in the leg. We keep having to stop every time The Child drops his book or needs his banana peeled down a bit more. I have ass-sweat, and the running is hard because of the no bra situation.


popular
These 5 Foods Could Increase Your Chances of Having Twins
Baby lead weaning: 100 easy baby led weaning finger food ideas
10 Marvel-inspired baby names that are perfect for your little superhero
40 gorgeous baby names predicted to be trending in the next decade
Can you pronouce these 7 'unique' baby names? They're trickier than you think
Jamie Oliver's MUM spots her grandson on the floor... and she's not happy!
Hilaria and Alec Baldwin have welcomed baby No. 6 — five months after baby No. 5
You may also like
1 day ago
Raising boys: The beautiful words every boy mum needs to hear
2 days ago
Hillary Duff dyed her hair blue – and the internet immediately mom shames her
2 days ago
Back to school (again): The 15-minute trick that is about to change your hectic mornings
4 days ago
Maths is harder than ever for parents says study – and tell us something we don't know
1 week ago
The internet is loving Princess Eugenie's "very real" first baby pictures
1 week ago
Dying for a foreign holiday? Karen Koster just shared a picture that might make you feel better
Next Page