Ireland's call has been answered, Adam King will be back on the telly tomorrow night.

The stars of last week's Late Late Toy Show was of course everyone who got involved and warmed the nation's hearts, but one guy in particular really took the spotlight: Adam King. And now he's going to be back on our screens for Friday night's Late Late Show.

Tubridy has revealed on Instagram that the young man will be back on our screens tomorrow night, so cancel your plans and get the couch ready for a night in with the most special boy who captured the hearts of millions.

Per aspera ad Astra, Adam. Keep looking to the stars young man. In the meantime, we'll reach out to our friends @NASA & see if they can't help bring your dreams a little closer. pic.twitter.com/DqRZwdziDQ

Tubridy posted the news on Instagram saying: “We’re getting ready for an amazing Late Late Show tomorrow night, it’s a tribute to Sharon Shannon, but also… I think we need to bring back young Adam King.”

On last week's show, which was viewed by over 1.5 million people, Adam talked about his love of space and his dream of one day becoming a capsule communicator for NASA.

Adam suffers from brittle bones and spends most of his time in a wheelchair. He explained to Ryan that even though he wouldn't be able to be an astronaut in space he could still work for NASA on the ground.

There’s space for everybody at NASA, and we can’t wait for him to one day join our team of dreamers. We’ll be here when he’s ready. ? pic.twitter.com/WJCzue9O13 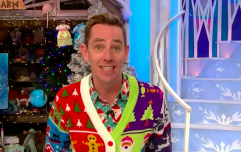 END_OF_DOCUMENT_TOKEN_TO_BE_REPLACED

The six-year-old boy has inspired the country with his words and dreams of one day working for the space administration.

After his appearance on the show last week everyone was talking about Adam King, even NASA.

They tweeted offering the boy a spot on their team when he's ready! "Adam’s kind heart and adventurous spirit inspires us," they said. "There’s space for everybody at NASA, and we can’t wait for him to one day join our team of dreamers. We’ll be here when he’s ready."

Canadian astronaut Chris Hadfield also messaged the young boy after seeing the clip on him on the show, saying: “Adam – I’ve been lucky enough to CAPCOM many spaceflights. We should talk space together. Take care, be good – Chris.”

The Late Late Show kicks off on Friday night at 9.35pm.


popular
Sligo teacher creates animated video series for Junior Cert revision
Positive parenting: 11 little things that mean the world to kids
Nutella Biscuits have arrived in Ireland
40 gorgeous baby names predicted to be trending in the next decade
4 ways to fix hard slime with ingredients you probably already have at home
NPHET to advise the Government that all schoolchildren return to school the end of February
Matthew Perry's dad was a character on Friends and how did we not notice?
You may also like
1 month ago
Late Late Toy Show accused of "using kids to promote vaccine"
1 month ago
Late Late Toy Show records highest viewing figures ever
1 month ago
Ryan Tubridy finally confirms what he said after Late Late Toy Show f-bomb claims
6 months ago
RTÉ is hosting a Late Late Toy Show singalong this month and the kids will love it
9 months ago
'Like so many other people in Ireland' Ryan Tubridy tests positive for Covid-19 virus
9 months ago
World Vision Ireland extends essay deadline for children due to shutdown
Next Page