There is literally nothing cuter in this world than hearing your own child find their little voice and start talking.

Seriously – that first 'mama' will floor you, trust me. And just wait till they manage their very first 'love you.' The tears!

However, according to some new US research from Harvard and Penn, researchers found that even more important than the amount of words a child hears is the amount of conversations—however loosely defined—they’re having with adults.

Specifically, the researchers monitored what they called “conversational turns,” or when an adult and child speak to one another with no more than five seconds between words. After evaluating kids with brain scans and verbal tests, conversational turns proved much more beneficial to speech development than the number of words spoken to a child. In other words, it is the interaction that matters more.

The study looked at 36 kids between the ages of 4 and 6 from diverse socioeconomic backgrounds. Before any sort of word or conversation tracking began, kids were given verbal reasoning tests, and their brain activity was measured while they listened to audio stories. Then, they were sent home with a digital voice recorder that could hold up to 16 hours of conversation. When the recordings were analyzed, they were broken down by words spoken by kids, words spoken by adults, and conversational turns.

“The sheer amount of language children heard spoken by adults wasn’t linked to children’s brain responses, but the number of conversational turns was,” Rachel Romeo, lead author of the study, explains to The Bump. This was somewhat surprising, since historically, an emphasis has been placed on making sure kids hear as many words as possible; the “30 million word gap” is used to describe how many more words kids from higher-income families hear by age four, compared to kids from lower-income families. 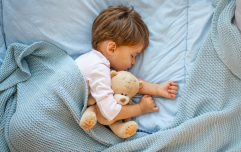 END_OF_DOCUMENT_TOKEN_TO_BE_REPLACED

“We worried the message around the word gap was suggesting that parents dump words into their kids,” Romeo says. “The brain response show us that’s not the case; it’s the interactive language, the back-and-forth that is most important for the brain.”

Interestingly, for every 11 conversational turns, a child’s verbal test score increased by a point, regardless of socioeconomic background.

And parents – it doesn't really matter what the heck you are talking about (as in; recite poetry if you will, or just tell them about your crappy day in work) as long as you’re responding affectionately to your baby, toddler or child. What matters most, apparently, is that you’re indicating to them that they’re being heard.


popular
#MomLife: 7 things I wish I done more of when my children were babies
Raising boys: The beautiful words every boy mum needs to read
Prince William reveals that mealtimes with small children can be a bit of a challenge
20 Unisex Irish Baby Names That Are Absolutely Magical
Totally tropical baby names inspired by Hawaii
4 ways to fix hard slime with ingredients you probably already have at home
#Covid-19: Dublin Zoo reopens today with new safety measures in place
You may also like
3 weeks ago
The best ways to prevent heat stroke in babies and small children this summer
4 weeks ago
'No beneficial function': The reason you should never let your baby use a walker
1 month ago
The bullseye toilet bowl light that is teaching little boys to aim better when they pee
1 month ago
My toddler was super-bossy – but here is how I dealt with her (crazy) demands
1 month ago
DIY: The super clever (and simple) Ikea hack that'll no doubt make your life easier
1 month ago
Should you give your child a soother? Here's exactly what you need to know
Next Page