After announcing she and Tommy Fury are expecting their first baby over the weekend, Molly Mae Hague has opened up about some of her pregnancy symptoms so far.

During an Instagram Q&A on Wednesday, the former Love Island star discussed some of her symptoms, as well as how she had to keep her pregnancy a secret for a while.

Confessing that she didn't film her friends and family's reaction to the news, she admitted that even filming Tommy's was strange.

She said: "I just didn't feel ready to make videos/film things for a good while because I still couldn't comprehend that I was pregnant myself. Sometimes I still don't believe it now (even though I can feel the baby move).

"I absolutely love watching other people's pregnancy reaction vids and I always imagined we would make one! But yeah I think I just wasn't ready to get the camera out."

And moving on to speak about her pregnancy symptoms, Molly Mae recalled how "lucky" she was to not experience morning sickness. 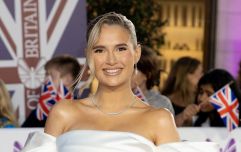 END_OF_DOCUMENT_TOKEN_TO_BE_REPLACED

She said: "I have been insanely lucky and haven't had any sickness. Any small amounts of nausea I had at the start were cured instantly by eating a meal/snack. I was able to keep working and living life as usual which really helped me to keep a secret.

"I know a lot of women experience such horrendous sickness through pregnancy and my heart truly goes out to them because I can imagine it's just awful."

Hiding the pregnancy from the internet, Molly Mae added that she didn't find it hard to keep it a secret, adding: "I set myself a goal to get to 5 months without people knowing and I really didn’t think I would get that far… but we actually went past that point!

"It was so special having it as mine and Tommy’s secret – I also have some amazing secret-keeping friends/family too."

popular
People are realising what the red Christmas lights are actually for
Parents told to stop buying selection boxes for kids- here's why
Opinion: He may be a politician, but Leo Varadkar's personal life is none of our business
Expert says Cocomelon acts "as a drug" to kids' brains
"My heart sank": Tubridy hit with backlash over Toy Show remark
Elf on the Shelf is actually pretty bad for your kids, according to an expert
Shows like Bluey and Peppa Pig are actually bad for kids, expert warns
You may also like
1 month ago
Molly-Mae Hague reveals she cried for weeks during early pregnancy
2 months ago
Has Molly Mae Hague accidentally revealed her baby's gender?
3 months ago
Stacey Dooley and Kevin Clifton are having a baby
7 months ago
Love Island's Olivia Bowen calls out body-shaming of pregnant women
9 months ago
Towie's Lauren Pope announces she's expecting her second child
9 months ago
Rosie Huntington Whiteley welcomes her second child
Next Page