Prince Philip caused quite a bit of bother last week.

The Duke of Edinburgh's Land Rover collided with another vehicle and overturned last week near the Queen's Sandringham estate.

Two women in the other car were hospitalised following the incident. A baby had also been present in the vehicle.

48 hours later, Prince Philip was spotted driving near the entrance to Sandringham in a replacement Freelander without a seatbelt.

However, now a former royal security officer has said that it's not uncommon for the royal family to go without a seatbelt. Apparently, it means in the case of an emergency, they can escape more easily than if they were strapped in.

Former royal protection officer Simon Morgan told Hello! Magazine: "There are always anomalies. In the threat and risk matrix it's a matter of looking at each individual situation to decide what is the best way of achieving what needs to be achieved. 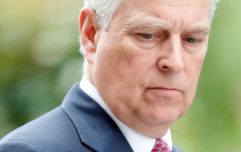 Prince Andrew returns all of his military titles and royal patronages

END_OF_DOCUMENT_TOKEN_TO_BE_REPLACED

"For example, considering that a quick entry or exit to a vehicle is easier when people aren't strapped into seat belts."

He added, "Also, what is significant about this event or situation? Is an individual's look and appearance important? And also an individual's choice. Protection is a very unique area of policing and there are a lot grey areas, but you are always judging each situation to weigh up the risks and threats with the outcomes you are trying to achieve."


popular
Surrogate who had 13 babies for other people accidentally gave away her own son
Egyptian teen found dead after fake naked images of her shared online
Virgina Giuffre wants a resolution that vindicates her and other victims, says lawyer
Not every parent will agree with this mum's stomach bug hack
John Mulaney's ex-wife Anna Marie Tendler opens up about "surreal" Olivia Munn baby news
Sacred Heart School, Tullamore, write beautiful tribute to Ashling Murphy
"A special girl": Ashling Murphy's parents pay tribute to their daughter
You may also like
6 days ago
This is 40! The Duchess of Cambridge glows in 3 stunning new birthday portraits
1 week ago
Lily Collins reveals she threw a toy telephone at Prince Charles' head
1 week ago
Prince George is slowly beginning to understand "his destiny"
1 week ago
Here's why Kate won't let Princess Charlotte have a best friend in school
3 weeks ago
The Queen has a rather strict rule for George, Charlotte and Louis at Christmas
1 month ago
Prince Charles denies new claims he was the one who speculated about Archie's skin tone
Next Page