The days are short and the evenings are gloomy.

But its isn't all bad news, guys – certainly not for mothers who are expecting their babies in the next couple of months, according to a new study.

Yep, that's true. Some intriguing new research has shown that women who give birth in winter (and also spring) are less likely to suffer the 'baby blues' than those who give birth at other times of the year.

This might sound a bit odd, given that so many of us naturally feel more anxious and 'down' during the winter months, but the researchers from Harvard Medical School believe the reasons for their findings actually make good sense: Being that friends and family are more likely to rally round and help as the weather turns colder and are on hand to offer greater psychological support.

Dr Jie Zhou, from Brigham & Women's Hospital in Boston, was one of the lead researchers in the Harvard study, which reviewed the medical records of 20,169 women who had babies between June 2015 and August 2017, and explained her team's findings this way: 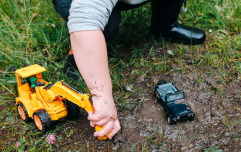 END_OF_DOCUMENT_TOKEN_TO_BE_REPLACED

"We wanted to find out whether there are certain factors influencing the risk of developing postpartum depression that may be avoided to improve women's health both physically and mentally," she explains. "We have a few theories. Delivery will typically confine mothers to indoor activities with the newborn babies. It is naturally occurring for postpartum women in winter.  Holiday season in the winter is very enjoyable."

Another explanation for the seasonal dip in baby blues could be down to something as simple as Vitamin D levels.

"Literature has linked postpartum depression to Vitamin D," Zhoe explains. "Its storage may deplete in a few months without proper supplement or sun exposure, which could be related."

popular
Bride asks for divorce day after wedding following groom's disrespectful cake stunt
Entrepreneur schoolboy has made £1,000 from selling sweets
Molly-Mae's nursery leads to spike in demands for replicas
Parents believe CoComelon causes tantrums and speech delays in toddlers
Police believe they know what happened to missing dog walker Nicola Bulley
These are the most popular names for babies born in February
Kylie Jenner had an Astroworld themed party for her kids and fans aren't happy
You may also like
4 months ago
Research says working mums of two are twice as stressed as working women with no kids
5 months ago
Lengthening a woman's fertility may extend her life as well, studies find
6 months ago
Bottle-fed babies are ingesting 'millions' of microplastic particles daily, study finds
6 months ago
Mums are sleep deprived for six years after having a baby – and yet dads are not
6 months ago
Toddlers are happier with fewer toys, study finds
7 months ago
This is what new parents in Ireland think is the hardest part
Next Page