Scientists have developed wearable tech to prevent couples from fighting

It is normal not to agree 100 percent on things the whole time, and being able to fight (fair) about things (and then make up again) shows that you are two people with two opinions in this relationship, and you are both comfortable not only expressing an opinion that might vary from that of your partner but also feel safe enough in your relationship to know that it can withstand the odd squabble.

However, sometimes it would be nice to have some kind of warning system in place, no? A way of telling if your partner or spouse has had a crap day and could be about to start a fight with you over something rather silly and avoidable? Well, now there is. At least, Researchers at the University of Southern California think they might have invented just that.

According to a recent study by a team from USC, it is possible for “passive modal computing” (read: wearable tech, basically) to monitor, gather, and analyse data from your body – to detect when you’re stressed, anxious, or sad. Having established that, the researchers developed algorithms to define these emotions and collected data from participants like body temperature, heart activity, sweat, audio recordings, what the participants’ were saying, and their vocal intensity through wearables, cell phones, and physiological signals.

To test their idea, the researchers then analysed couples using the data while simultaneously having the couples self-report on their emotions and actions when conflict within the relationship occurred. The result? The authors found that their algorithm was 86 percent accurate in its ability to detect the conflict – and by predict it, the idea is that you can now be better prepared to avoid it altogether.

This is what lead author and psychology PhD student, Adela C. Timmons, had to say about her team's work: 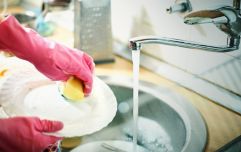 According to science, if men want more sex, they should do the dishes

END_OF_DOCUMENT_TOKEN_TO_BE_REPLACED

“The eventual goal [is to] develop interventions to improve couple functioning.” In other words, the authors believe they can create tech to alert both you and your partner when there’s a high probability for a disagreement. So if you’ve had a bad day at work (and are showing all the physiological signals of conflict), the tech could send your partner a text advising them to be respectful of your space when you arrive home.

Or, you know, it could set off an alarm suggesting you meditate for 10 minutes before heading home – so that you are not all riled up and dying for a good scrap by the time you meet up with your other half again.


popular
Ekin-Su and Davide taking their mums to New York with Love Island winnings
Five teenage girls rushed to hospital after crash in Kilkenny
Dr Laura Lenihan shares her expert advice on how to stay safe in the sun
Baby twins die in hot car after dad forgets to drop them to creche
You can now choose who can and can't see you're online on WhatsApp
Mrs Hinch opens up about being Stacey Solomon's bridesmaid
Shows like Bluey and Peppa Pig are actually bad for kids, expert warns
You may also like
4 weeks ago
Mindfulness in schools does not improve mental health, new study finds
1 month ago
Study says that these childhood experiences can affect our health for life
1 month ago
There's a reason why babies love to sleep with their bum in the air and it's adorable
2 months ago
Children with these names are statistically more likely to be successful
2 months ago
Being raised by a working mum has long-lasting benefits to both girls and boys
2 months ago
The reason why mums wake up when babies cry and dads stay asleep is interesting
Next Page