There is no denying that childhood obesity has become a very stubborn health issue here in Ireland.

With matching and equally worrying figures for many other countries across the developed world.

In fact, according to a report last year, Irish 14-year-olds have become on average  14kgs heavier (more than two stone) in the past 50 years. That is a rather stark number, no?

And while there are many measures that need to be taken in order to turn this trend around, a UK health expert has a very simple solution she reckons will go a long way in changing things for the better when it comes to our children's weight and overall health.

"Families who do not have dinner around the table run their risk of children getting fat," Prof Dame Sally Davies, chief medical officer and the UK's “nanny in chief” has warned and urged parents to have family meals together in order to ensure slimmer waistlines and boost brainpower.

Speaking at a rcent London debate, Davies said children were more likely to develop weight problems if they were allowed to indulge in “mindless” eating in front of TV and computer screens.

And she also suggested that conversations around the dinner table were also crucial for children’s intellectual development – on the background of several studies linking high levels of screen time to a greater risk of obesity.

Dame Sally told a debate in London: “When people are using screens or watching the television that their calorie intake goes up … because if you don’t concentrate on the food, the social interaction is fairly mindless and the feeling of satiation is not recognised as easily. We would like people to sit down and eat together and actually if you look at child development they need to interact with their families - with adults - and mealtimes are a very important part of that."

Eating together could go a long way in making our children healthier, Davies said.

“Proper meal times with healthy food are going to help our children develop effectively and probably help our waistlines,” she stated. 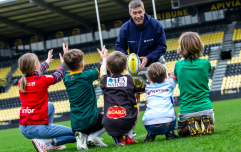 END_OF_DOCUMENT_TOKEN_TO_BE_REPLACED

According to The Telegraph, others at the event suggested Britain should attempt to emulate France, in its eating habits.

“One of the reasons that drives the UK up the obesity charts is the way we eat - the environment we do it in, Hugo Fry, managing director of pharmaceutical giant Sanofi said. "We are massive TV eaters, grab-and-go eaters. At the other end of the chart the French … sit down as a family at every single meal - breakfast lunch and dinner.”

Tell us – do YOU sit down for dinner as a family? Or do you struggle to have time to make this happen? Let us know in the comments or tweet us at @herfamilydotie


popular
These 5 Foods Could Increase Your Chances of Having Twins
7 Things To Buy The Newborn That Has Everything
Rare "Sahara dust" weather event expected to hit Ireland this week
20 Unisex Irish Baby Names That Are Absolutely Magical
RTÉ 2 wins rights to Harry and Meghan's Oprah interview
McDonald's have reopened 6 drive-thrus in Dublin today and we're not crying, you're crying
Why I Can't Deal With People Who 'Hate Children'
You may also like
2 days ago
Get moving this April and raise funds for a good cause with Focus Ireland's virtual marathon
2 days ago
Vicky Phelan "hopeful" as she receives first results from new treatment
1 week ago
Cabinet sub-committee recommends Level 5 restrictions until April
2 weeks ago
Phased reopening of all schools planned from the start of next month
3 weeks ago
A 10-year study just proved a dangerous link between teens and social media
3 weeks ago
10 small ways to stay positive and get through the gloominess of winter
Next Page