A "united," blended family is "normal" to the reality star.

Kim Kardashian is apparently looking to sisters Kourtney and Kylie as co-parenting inspirations amid her divorce from Kanye West.

Kim, who filed for divorce from the rapper in February, wants the pair to be able to put their best foot forward when it comes to raising their four children, North, 8, Saint, 5, Chicago, 3, and Psalm, 2.

Speaking to Hollywood Life, a source said: "Kim is trying her very best to mend any gaps with Kanye. She tries very hard to speak with him but every day is a different story.

"She'd love to get to a place where they can spend more time together as a family like Kourtney does with Scott or Travis and Kylie. That's the model for her family she wants. She looks up to them in that way."

Kourtney has been in an on-and-off relationship with the father of her three children, Scott Disick, for years. 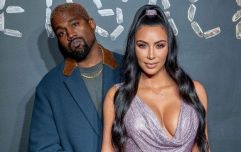 END_OF_DOCUMENT_TOKEN_TO_BE_REPLACED

The pair, who share sons Mason, 11, and Reign, 6, as well as daughter Penelope, 9, have been "great friends" and co-parents for years after splitting due to Scott's substance abuse and infidelity.

Kylie recently reconciled with her three-year-old daughter's father, Travis Scott. Prior to getting back together the two had been maintaining a close friendship as they focused on co-parenting Stormi.

Kim reportedly hopes for a similar relationship with Kanye, in which their kids can enjoy time with each parent separately as well as together.

"She's willing to do anything to get them to the best place as possible for the sake of the kids," the source continued. "That's her primary concern. She wants them to travel and have family dinners together.

"You have to remember that when Kim was growing up she had the blended, united family [with] her mom always making sure her father and [Caitlyn Jenner] were included. It's normal to her."


popular
Woman's suitcase and bank cards stolen as she gives birth in Dublin hospital
Calls for child benefits to be taxed to help fund early years services
Expert says Cocomelon acts "as a drug" to kids' brains
Sinéad Kennedy won't give "a second thought" to those commenting on post-baby body
Daughter of missing Dublin woman issues heartbreaking plea
Mass murderer Anders Behring Breivik applies for parole for 2011 killings
Man arrested on suspicion of murder of Ashling Murphy
You may also like
3 months ago
Kim Kardashian admits she's "guilty of a good bribe" when it comes to parenting
3 months ago
Kim Kardashian may have just started filming her new reality show
7 months ago
Kim Kardashian says she didn't edit her waist in new Skims advert
7 months ago
WATCH: Kim Kardashian might actually be a more relatable mother than we thought
10 months ago
It's over: Kim Kardashian files for divorce from Kanye West after weeks of speculation
2 years ago
Kim Kardashian's eldest daughter looks 'like a teenager' in latest snap
Next Page