It's a pretty impressive line-up.

Hollywood leading man Seth Rogen, relatives of the victims of the Ballymurphy Massacre and a couple of hopeful teenage entrepreneurs will be guests on Friday's episode of The Late Late Show.

Star of comedies like Bad Neighbours, Knocked Up and The Interview, Rogen will be appearing on the show to promote his autobiography Yearbook.

The actor and producer will talk to Tubridy about the new book, getting to meet his heroes and how one of his comedies nearly started World War III.

After a coroner's report found all 10 victims of the Ballymurphy Massacre "entirely innocent" this week, some of their relatives will speak with Tubridy about the long road to this point and what they feel UK Prime Minister Boris Johnson must do next.

After making headlines last month, when they had to take their case to court to avoid mandatory hotel quarantine with their eight-day-old baby Theo, Mark and Sinead Gallagher-Hedderman will share their experiences with surrogacy. 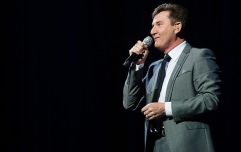 END_OF_DOCUMENT_TOKEN_TO_BE_REPLACED

To mark the 30th anniversary of Alan Parker's iconic adaptation of Roddy Doyle's novel The Commitments, a supergroup - including West End star Killian Donnelly and Eurovision winner Niamh Kavanagh - will perform its soundtrack's songs on the programme.

On top of all this, The Late Late Show will also be showcasing some innovative inventions made by teen entrepreneurs for The Student Enterprise Awards


popular
Mum told to kick "entitled" 25-year-old out of their family home- do you agree?
There's a new Lindt store in Kildare Village and we'll race you there
Young woman suffers "life-changing injuries" after being hit in face with firework in Galway
Everything parents need to know about the respiratory syncytial virus
Alec Baldwin breaks silence after tragic shooting of Halyna Hutchins
Cause of death of family who mysteriously died while hiking revealed
Study reveals how long women should wait between pregnancies
You may also like
2 days ago
NWCI says garda’s 3-month sentence for domestic violence will discourage victims
3 days ago
Online platform allowing students to report on-campus sexual violence launches
4 days ago
Irish parents warned of dangers common seasonal spice poses to kids
4 days ago
Wexford primary school forced to close until next month due to Covid outbreak
5 days ago
School Run News: Top stories for Monday, October 18
1 week ago
Liveline caller says free contraception not needed as “everybody has an imagination”
Next Page