Spencer Matthews is climbing Mount Everest in a bid to find his late brother's body.

In 1999, Michael Matthews reached the summit of the world's tallest mountain, becoming the youngest person ever to do so.

But tragically, the 22-year-old died during his descent and his body was never recovered.

Now, his brother Spencer is going to attempt to retrace Michael's steps and try to find his body, as part of a new documentary, Finding Michael.

Speaking about the programme, which has been made with Disney+, the 34-year-old said: "It was important for me to get my head around the fact I might come face to face with my brother’s frozen body.

"I knew it was going to be a gut-wrenching and emotional journey."

Spencer was just 10-years-old at the time of Michael's passing.

Michael Matthews became the youngest person ever to climb Everest, but tragically died on the descent. A charity has since been set up in his name (Michael Matthews Foundation) 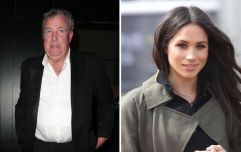 Jeremy Clarkson apologises to Meghan Markle over for 'disgraceful' column

END_OF_DOCUMENT_TOKEN_TO_BE_REPLACED

He recently took to Instagram to reflect on the upcoming documentary: "During recent years the question of whether or not Mike could be found and brought home to our family was often on my mind.

"I became uncomfortable with the thought of him being left up there, possibly in plain sight.

"Over the last eighteen months or so we’ve been making a documentary film about this once in a lifetime journey to the highest point on earth.

"I am now proud to announce, together with @DisneyPlusUK that early next year we will bring you Finding Michael, a strong and powerful story of brotherly love.

"This has been the most meaningful and humbling experience of my own life and it is hoped the film will deliver my brave brother the decent legacy that he earned when so young."