Happy days! Black tea has been linked with weight loss

Get the kettle on...

We never need much of an excuse to have a cup of tea but we now have yet another reason to justify our five-a-day habit.

Your morning cuppa could help you lose weight, according to a new research.

A study has found that black tea stimulates the production of good bacteria in the gut and boosts metabolism.

Researchers at the University of California conducted the study using mice.

The researchers tracked the mice's weight over a four-week period and found that those which had had black or green tea extract in their diets lost as much weight as the mice on the low-fat, high sugar diet.

They also produced more Pseudobutyrivibrio, a type of gut bacteria associated with metabolism.

Green tea has previously been linked with metabolism but this study is one of the first to highlight the benefits of black tea. 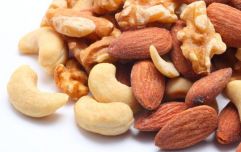 Eating this nut with your breakfast can help burn fat

END_OF_DOCUMENT_TOKEN_TO_BE_REPLACED

"Our new findings suggest that black tea, through a specific mechanism through the gut microbiome, may also contribute to good health and weight loss in humans," said Susanne Henning, the study’s lead author.

“For black tea lovers, there may be a new reason to keep drinking it."

Sadly, the researchers only used decaffeinated tea in the study, so we'll just sit here sipping until someone discovers our favourite regular teas have magical powers.

popular
Irish dad shares warning after his 12-week-old baby was hospitalised with RSV
9-year-old boy will "never be the same again" after Wexford dog attack
7 Christmas markets and Santa experiences to visit with kids this winter
There's a FREE Santa experience happening in Dublin
"I want to spend all my time with them": Vogue Williams on suffering from mum guilt
Kelsey speaks out about moving on after Tom Parker's harrowing death
'We want a family': Suzanne Jackson on having kids with husband Dylan
You may also like
1 year ago
Pinterest bans ads promoting weight loss and referencing BMI
1 year ago
Food Safety Authority of Ireland recalls weight loss capsules following fatalities
1 year ago
The Body Coach Joe Wicks' PE classes are back for lockdown
3 years ago
Gemma Collins reveals her transformation after 3 stone weight loss in new snap
3 years ago
Operation Transformation leader Paul Murphy broke viewers’ hearts last night
3 years ago
Woman loses 12lb in a week days on strict potato diet - but there's a serious catch
Next Page