Her son's head is flattened on one side.

The mum opened up about her son's diagnosis after her followers noticed his head was flattened on one side.

Marnie explained that due to her son's position in the womb, he developed torticollis.

This means her baby boy cannot move his head to the left.

The former Geordie Shore star is hoping he can fix this with physio appointments, but there is a long way to go.

She told her followers, "This condition has left him with plagiocephaly. The head is flattened on one side, causing it to look asymmetrical.

"This can cause the ears to be misaligned and the head looks like a parallelogram when seen from above.

"Sometimes the forehead and face may bulge a little on the flat side." 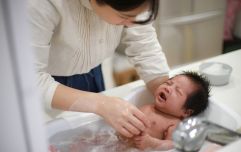 END_OF_DOCUMENT_TOKEN_TO_BE_REPLACED

Marnie explained that she wants to be open about this process because so many parents are afraid to talk about it.

She wants anyone going through the same experience to feel less alone.

The mum said she was shocked when she noticed the "severe side" of her son's head, but he will be fitted for a helmet which will hopefully help Oax.

"I’m being open about his process as I know so many parents don’t even know about this issue.

"He’s had his measurements taken yesterday and in 2 weeks he’ll get his helmet fitted this," she shared.

Marnie said her son will make progress with treatment. Treatment usually starts when your baby is 4-6 months old because their skull is still soft then.

popular
Babies born in February have some pretty cool advantages – no, really – it's true
We have St. Brigid to thank for our new bank holiday, but who exactly was she?
These 40 baby names are set to trend in 2023
Little boy dies of cancer after doctors ignored mother's concerns six times
11 of the best fun playgrounds in Dublin
Man sues friend for £1.9m after she refused to be his girlfriend
Bride asks for divorce day after wedding following groom's disrespectful cake stunt
You may also like
7 months ago
Your child's developmental checks and what you can expect during them
7 months ago
Mum sets up 'Hygiene Nook' to keep baby safe and other parents love the idea
7 months ago
This common mistake can increase the risk of heatstroke in babies
10 months ago
Scientists believe C-section babies should be feed mum's poo to help their immune system
1 year ago
Parents are putting these signs on newborns and it's for a very good reason
1 year ago
Musings: I never thought I'd be obsessed with poo...but then I had kids
Next Page