Prince George has just rocked up to Princess Eugenie's wedding and he is being the ultimate cutie as per usual.

Just look at the expression of glee on his face, you can't help but get the giggles along with him.

The five-year-old has been spotted picking his nose and we are in bits laughing at the various tweets shared about the royal wedding.

The bridesmaids and page boys, including Prince George and Princess Charlotte, arrive for the wedding of Princess Eugenie to Jack Brooksbank #RoyalWedding 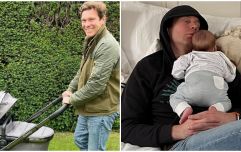 END_OF_DOCUMENT_TOKEN_TO_BE_REPLACED

The little monkey is in the care of his nanny Maria Borrallo and Twitter is loling after spotting the little prince picking his nose.

GAS, we actually can't stop laughing at him and here's hoping he provides some more hilarious moments.

I am howling at this wedding. I love the Royals! Hats blowing off left right and centre!! Prince George picking his nose!

Tune in for more royal wedding coverage throughout the day, we are glued to the live stream.

popular
Irish dad shares warning after his 12-week-old baby was hospitalised with RSV
9-year-old boy will "never be the same again" after Wexford dog attack
7 Christmas markets and Santa experiences to visit with kids this winter
There's a FREE Santa experience happening in Dublin
"I want to spend all my time with them": Vogue Williams on suffering from mum guilt
Warning issued to Irish parents after increase in RSV cases
Olivia Wilde wanted to work through issues with Harry Styles
You may also like
1 year ago
The internet is loving Princess Eugenie's "very real" first baby pictures
1 year ago
We a cutie! Princess Eugenie shares first picture of her baby boy – AND reveals his name
2 years ago
Buckingham Palace announces the date and location of Princess Beatrice's wedding
3 years ago
Princess Eugenie shares adorable post to celebrate her first wedding anniversary
3 years ago
Princess Eugenie just wished Jack Brooksbank a happy birthday in the sweetest way
3 years ago
Royal expert says Meghan Markle's pregnancy was first spotted at Princess Eugenie's wedding
Next Page