Snapchat urge parents not to worry about new map feature

Snapchat’s new update came with a feature called ‘Snap Map’ but many parents have been left worried for their children's safety.

In a bid to reduce parents worries a spokesperson for Snapchat has released a statement saying,

“Snapchatters can choose exactly who they want to share their location with, if at all, and can change that setting at any time. It's also not possible to share your location with someone who isn't already your friend on Snapchat, and the majority of interactions on Snapchat take place between close friends.”

According to the Independent, Snapchat is now the most used texting and photo sharing platform among Irish teens and children while being the least used social media service among parents. Ipsos MRBI also states that 26 percent of people over the age of 15 use Snapchat in Ireland with tens of thousands of children under that age using it also.

The first time you enter Snap Map, you choose who to share your location with. We won't show you on the Map before then!

Since the new feature arrived, parents have grown increasingly concerned over the fact that children can share their location with anyone they may be ‘friends’ with on the service, paving the way for potential danger. 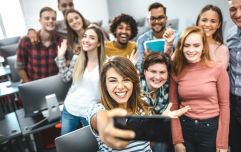 END_OF_DOCUMENT_TOKEN_TO_BE_REPLACED


popular
Parent's Benefit Leave extended from today - here's what you need to know
"You're disgusting": Prince William roars at photographer who was 'stalking' his family
Supermarkets add security tags to baby formula as cost of living crisis deepens
I tried 'slow parenting' for a year and I'm never going back
Vicky Phelan shares message of support with Charlie Bird as she deals with pain
6 fun things to do in Dublin on your next family day out
New sleep safety guidelines: "No co-sleeping at all"