Do men need to worry about rising paternal age?

Much has been made of rising maternal age in this part of the world in recent times, with experts advising women to start families before turning thirty. But where are the guys in all of this? Not just in terms of decision-making, but what about rising paternal age – is it something that ever worries men?

The reality, of course, is that while women’s fertility does decrease over time, there comes a point after which it’s no longer possible to become pregnant. Men do not have the same barriers.

Celebrities seem to be at the forefront in demonstrating this - well known older fathers include Robert DeNiro, who was 68 when his last child was born in 2011, Clint Eastwood who was 66 when his seventh child was born, and Steve Martin who, at 67, became a dad for the first time.

In real life, examples like this are less common (or perhaps just less obvious outside the glare of the camera) but according to a recent Growing Up In Ireland report, more than four in ten Irish babies have dads aged 36 or older. Do men worry about paternal age?

“I guess we have been pre-conditioned to worry about women leaving it too late, but there are so many examples of dads being older that we put it to the back of our minds,” says Ciaran, 39, a dad of two. “Research into risks associated with men leaving it late is still relatively new, whereas women have been 'warned' for years.”

It’s true - even before we know anything about fertility. I remember being about eight years old and joining a conversation at school about “finding husbands.” If we didn’t find husbands by the time we were 25, we were all joining the convent. I can’t remember the context or where any of us picked up the idea, but I have the clearest memory of the intention – husband or bust.

Today, my daughters don’t know what a convent is, but prompted by a recent newspaper article; I asked my six-year-old whether it’s more important to be pretty or happy. She said happy. Great stuff. Then she followed up by saying that that’s because if you’re not happy, nobody will want to marry you. Oh.

I don’t know where she got the idea but it smacks of the “husband or convent” conversation of my childhood. Perhaps it’s just there, in the fabric of everything that’s around us – fairy tales about the handsome prince who saves the day and films in which the happy-ever-after always plays out to the chime of wedding bells.

My daughters sometimes chat about how many children they’re going to have. My little boy joins in with his own plans – he’s going to have three babies in his tummy. His sisters explain to him that he won’t have babies himself, but he will have a wife who does. He’s a little put out by this, but I suspect he’ll get over it. And perhaps in thirty years he’ll start to think about it again, but of course, there’s no rush – or is there? 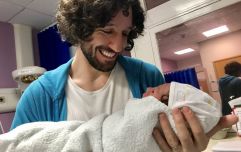 END_OF_DOCUMENT_TOKEN_TO_BE_REPLACED

Well, there are some biological implications – a Swedish study by the Karolinska Institute found a link between paternal age at childbearing and some disorders as well as lower scores at school. However the overall risk is low, so men don’t need to drop everything in a rush to make babies.

There are physical considerations – dads who are 35 may be better able to cope with chasing a toddler than dads who are 50. This is something Ciaran thought about before he and his partner started a family. “I guess I always wanted to be young enough to participate in all their activities and not just watch from sidelines.”

But this too varies from person to person. I don’t know that we need to write off older dads just yet. My take on it is that standing in a freezing playground is just as tough at 25 or 35 or 45. When I was in my twenties, I was marginally better at staying out all night than I am now, but I’m not convinced that I’d have been a much more energetic parent. Presumably, the same is true for many men.

Other factors credited with causing rising paternal age include financial stability and career progression – while one or two generations ago, many people left school and went straight to earning a living, today more men and women than ever go on to third level education, and often take time out for travel – something completely unknown to most of our parents.

Ciaran agrees. “People these days are probably more likely to head off travelling, which delays settling down. High rents and house prices mean people have to live at home for longer too.”

So men and women are meeting partners at a later age, settling down later, and starting families later. And really, that’s the crux of it – regardless of what any study says, or concerns about being the oldest dad in the playground, none of it matters until the right person comes along.

Just as women can’t drop everything to have kids because an expert says they should, men too need to be in the right place and with the right person too.

And if not, there’s always the convent.


popular
The Kivin method could help you get the best oral sex you've ever had
Unstructured play is vital for kids, so we need to stop entertaining them
The ironing hack that's about to make your everyday life so much easier
Expecting a baby boy? 10 short and sweet names that are actually really cool
The most popular baby names in the world have been revealed
Viewers raise over €290,000 after Munster's Billy Holland and wife Lanlih's emotional Late Late Show appearance
Kate Middleton says that she felt 'so isolated' after the birth of Prince George
You may also like
22 hours ago
'Fertility fear epidemic' is making couples anxious even long before they start trying for a baby
1 week ago
An improvement in diet has an almost immediate effect on sperm quality, study finds
1 week ago
Egg freezing: New research shows women have as little as a one in five chance of conceiving using frozen eggs
2 weeks ago
"Run down and emotional" Amy Schumer shares Instagram post about starting IVF
2 weeks ago
Study finds that women who wait till their 30s to become mothers live longer
3 weeks ago
Trying for a baby? Better set your alarm, because morning sex produces more babies
Next Page