"You have nothing on mom!"

While it might not be everyone's choice when it comes to feeding a new baby, most of us can agree it's one of the most natural things in the world.

Though there are still a strange few fish who make breastfeeding a taboo, for the babies themselves, it really is all just bread and butter.

So can be seen on TikTok, where mothers often share their breastfed baba's excited reaction to boobs.

In a recent addition to this genre of video on the platform though, it wasn't a breastfeeding mother who had an enthusiastic baby on her hands.

User @themuslimboxer uploaded a video of himself relaxing with his little girl, as onscreen captions read "when you forget mommy is at work."

The topless dad showed his daughter as she launched herself into his chest and tried to suckle. When she can't get any milk, she rises, confused.

Her dad gives a deadpan stare to the camera as she giggles and pinches his nipple.

"I don't have milk," he tells her, and she stares quizzically back at him in response. 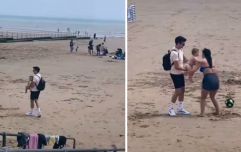 END_OF_DOCUMENT_TOKEN_TO_BE_REPLACED

"She looked at you like 'why do you even have this?'" commented one user.

"Laughed in his face – like, you have nothing on mom!" wrote someone else.


popular
Michael Jackson's daughter Paris speaks out about the PTSD her upbringing caused
A controversial new sex education programme for catholic primary schools is causing uproar
FM104 apologise for "making light" of voicemail from 4-year-old boy with additional needs
This mum can't understand why no one likes her 'teacher gift' idea
39 wives and counting: Meet the World's biggest family
Chrissy Teigen makes second public apology for "awful" cyberbullying and vows to be a better role model for her children
"My sister-in-law stole my baby name and now she's mad I'm still using it"
You may also like
1 week ago
If your little girl is now almost a teenager, these beautiful words are for you
1 week ago
This 3-year-old girl has hilarious reason for requesting morbid 'Lion King' birthday cake
1 week ago
New Look are "sexualising" children with padded bikinis for 9-year-old girls
4 weeks ago
My 11-year-old is still a child – so why is it so hard to find clothes for her suitable for her age
4 weeks ago
Pesto eggs are TikTok's latest viral food trend – and you need to try them
4 weeks ago
Man admits to spying on his wife using the nanny-cam
Next Page