A mother has shared a scary video of her child's car seat almost catching fire after the sun ricocheted off the mirror and onto the seat.

Luckily, she caught it before it caused damage to her baby, but admitted that she sometimes lingers in the car sending texts or emails while her baby asleep in the back, so it was a close call.

Sharing a video of the seat smoking, she said:

"This happened today. Britax seat and Eddie Bauer mirror. Thank God I was rushing home and didn't sit in my seat checking emails and responding to texts like I typically do while Mila is sleeping.

I've used car seats with mirrors with all my kids - never have I experienced this! Scary! (Britax has been notified)."

Speaking alongside the video, she said that the mirror on the back of the chair, that she uses to keep an eye on her baby, had reflected the sun's rays on to the seat and made it catch fire.

She also shared a follow-up picture of the damage done to the chair. 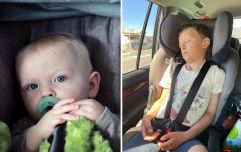 Extended car seat usage – what age will your kids stop?

END_OF_DOCUMENT_TOKEN_TO_BE_REPLACED

Lots of parents have pointed out that it is common sense not to leave the car in direct sunlight, especially when you have a large mirror in the back, but she responded saying, "just trying to make other informed this is a possibility. Never did it occur to me it would reflect and happen so quickly."

popular
Man sues friend for £1.9m after she refused to be his girlfriend
These 40 baby names are set to trend in 2023
'He's a changed man': Woman marries her 'high school bully'
Little boy dies of cancer after doctors ignored mother's concerns six times
Bride asks for divorce day after wedding following groom's disrespectful cake stunt
Dad admits he hates his daughter's name so much it makes him uncomfortable
Police believe they know what happened to missing dog walker Nicola Bulley
You may also like
1 week ago
The car seat hack that could save your child's life in an accident
3 months ago
What your baby should wear when travelling in a car seat during winter
5 months ago
Mum speaks out after leaving her 2-year-old daughter alone in car
6 months ago
Parents told to stop leaving their babies alone in cars
8 months ago
Road trip planned? Travel safe this summer with these car seat safety tips
11 months ago
Hilary Duff hits back at abuse after letting toddler in car without a car seat
Next Page