How to best ensure everyone in the house gets a good night's sleep is something every new parent has to figure out.

But now a new report by the American Academy of Pediatrics has shed some light on what is the absolute safest way for babies to sleep in order to minimize the risk of sudden infant death syndrome, also known as SIDS.

According to the report, for at least the first six months of their lives – ideally up to a year – infants should be sleeping in the same room as their parents. And by adhering to these rules, the risk of your baby suffering SIDS is cut by 50 percent.<

Wow. Fifty percent. That is a lot, which makes this a study worth paying attention to.

SIDS is the term used for an unexplained death of a healthy baby within their first twelve months, typically while they are sleeping. The vast majority (90%) occur during the first six months. About 25% of the time the cause of death can be attributed to something like strangulation or suffocation, which is why they say to keep stuffed animals and soft bedding out of your baby’s crib. But the rest of the time there is no explanation, which is why every new parent is scared of SIDS and why anything we can do to lessen the risk should be taken seriously.

The reason for the recommendations in the report is that by having the infant in the room with you, you are better able to respond to any distress or sign that something is “off.”

"The whole phenomenon of SIDS implies that we don't know 100% what is responsible for the death, but we have theories," said Dr. Lori Feldman-Winter, member of the Task Force on SIDS and co-author of the report. 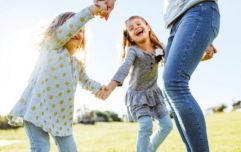 END_OF_DOCUMENT_TOKEN_TO_BE_REPLACED

These theories include that a baby's brain may not be developed enough to regulate respiration combined with an environment -- such as soft furnishings -- that aid asphyxia or nasal obstruction and simply that certain infants may just be more vulnerable due to genetics or physical traits.

The new AAP report, launched during the the AAP national conference in San Francisco this week, states that evidence shows parents sharing a room with their infant can reduce the risk of SIDS by as much as 50%.

"A baby that is within reach of their mother may have more comfort, or physical stimulation form being in an environment with another person," said Winter, adding that mothers being near their babies also facilitates breastfeeding, which in itself has been shown to reduce the risk of SIDS by 70%.

Did YOU share a room with your babies? For how long? Let us know in the comments or tweet us at @Herfamilydotie


popular
Hospital bag essential - mum shares 'Pad-sicles' hack all expectant mums need
Are you the middle child? It could mean that you're the best friend to have
The must-have decor buy for your baby's nursery is back in stock – and it's only €28
"She's already changed our world" Gigi Hadid and Zayn Malik welcome baby girl
A Unicorn Cheesecake recipe perfect if you have a birthday coming up soon
Win a complete Eucerin anti-pigmentation bundle for you and your mum
These 5 Foods Could Increase Your Chances of Having Twins
You may also like
2 days ago
Spending three hours a day in front of a screen has 'detrimental effect' on children's mental health
4 days ago
It takes six months for new mums to adjust to motherhood, a new study has revealed
1 week ago
Exercise during pregnancy can actually reduce your risk of complications by more than 25 percent
2 weeks ago
The very important reason little boys need to be parented differently
2 weeks ago
Parents spend an average of FOUR DAYS A YEAR wrestling kids into the car, new study finds
4 weeks ago
To predict how successful your child will be in life, look at how eager they are with chores now
Next Page