Does your child sleep with their mouth open? Here's what you need to know

Most of us will be familiar with the feeling of having to breathe through our mouths when we have a cold and a stuffy nose.

It is tiresome and often doesn't feel like we are getting enough air or getting to breathe deeply enough for the oxygen to do its job properly.

However, this is usually temporary and will go away, and we'll return to normal breathing soon enough.

But – for people who sleep with their mouth open, nose breathing can disturb sleep – and eventually become a real health problem. And did you know, it's not only a problem for adults?

Sleeping with their mouth open can affect both the quantity and quality of children's sleep and when this persists, it can become rather serious.

Unfortunately, sleep disorders are often left undiagnosed for a long time in children, and can lead to a whole variety of problems. In fact, behavioural issues, health issues, dental issues, and feeding issues can all be attributed to sleep disorders, new research shows.

Taking to Facebook, mum-of-one, Melody Yazdani, explained that her son, Kian, 8, had a sleep disorder that stemmed from sleeping with his mouth open. And yet, she reveals, it took years of stress and misdiagnoses as she tried to find out what was wrong with her boy, and what was the reason behind his troubling behavioural and health issues. 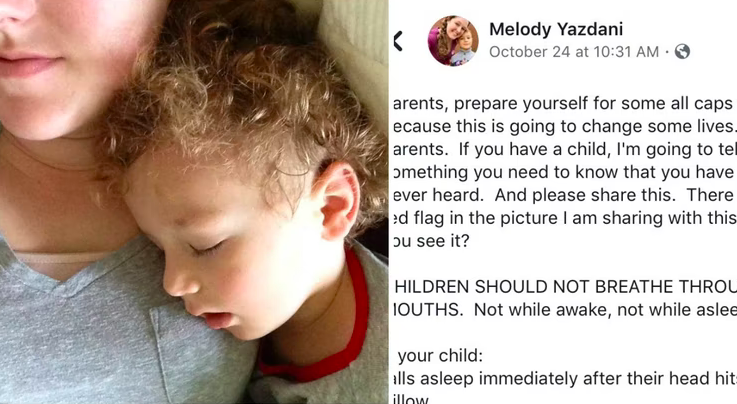 Yazdani explains how her son suddenly developed a whole slew of worrying symptoms. Teachers in the school reported he was having trouble keeping his body still. He got in trouble for pushing other kids and was having angry outbursts.

Yazdani says he was also having anger issues at home, and was going through a phase of being extremely picky with what he would and would not eat.

END_OF_DOCUMENT_TOKEN_TO_BE_REPLACED

Several misdiagnoses by doctors solved nothing, but eventually, Kian’s dentist noticed that he was grinding his teeth, and this, Yazdani explains, turned out to be her 'lightbulb' moment.

“I stumbled upon an article that changed our life,” Yazdani writes. “The article […] was about the connection between ADHD, sleep disordered breathing, and mouth breathing. Every word in this article sounded like Kian. This led me down a rabbit hole of research.”

After reading up on the matter, and consulting with an ENT, Yazdani learned that many of her son’s symptoms were a result of an undiagnosed sleep disorder. And Kian’s symptoms – including the open mouthed breathing you see in the pic she shared – were actually caused by the sleep apnea (as well as a case of sinusitis).

“Mouth breathing is NOT NORMAL and has long term consequences for health,” writes Yazdani.

“When a child breathes through their mouth, their brain (and body) is not getting enough oxygen. At night, this lowered oxygen saturation is detrimental to the quality of sleep and their brain’s ability to get enough rest.”

Speaking to ScaryMommy.com, ENT doctor Thomas Coomb explains that one of the symptoms of sleep apnea is indeed open mouthed breathing.

“Sleep apnea occurs when tonsils, adenoids, soft palate and the tongue get in the way,” Coombe says.

“When that happens, it can cause Upper Airway Resistance Syndrome – or UARS.

Other symptoms of sleep apnea/UARS mirror many of Kian’s symptoms, and include:

– A child who is hard to wake, and cranky in the morning


popular
Irish teachers "can't even string a sentence together"
Mum horrified after finding a knife inside the box of a doll she was buying for her daughter
Young mum and her 3-year-old son pack their bags to travel the world
Is your toddler waking too early? Do these 4 things
Vicky Phelan lends some support to Saoirse Ruane after surgery
Laverne Cox makes history with the first ever Trans Barbie doll
Dealing with sick tummies, sore heads or high fevers? We've got the perfect solution...
You may also like
1 week ago
Hospital charges woman $40 for crying during consultation
2 weeks ago
Pregnancy: 10 Top Tips for keeping cool during pregnancy this summer
3 weeks ago
Is your toddler a bad sleeper? This easy hack is about to make life easier
1 month ago
"Ground-breaking" cancer treatment now available for children in Ireland
1 month ago
Rosacea awareness month: 3 skincare products many rosacea sufferers swear by
1 month ago
Parents warned of hepatitis outbreak in children under 10 in UK
Next Page