"I can't remember life without him."

This Morning fans were left in tears this morning as Gogglebox's June Bernicoff spoke about her life with her late husband, Leon.

The couple were one of the first members of the public who were cast in Gogglebox, and quickly became firm favourites among viewers.

Tragically, 83-year-old Leon passed away in December last year after a short illness.

June revealed her decision to leave the show on social media in January, saying that it was "a great adventure with a great finale" - and that it just wouldn't have been the same without him.

Speaking on This Morning, she told Ruth Langsford and Eamonn Holmes about how writing her book - Leon and June: Our Story - has kept her busy.

"Fortunately I’ve been very busy because I was approached to write the book.

"That’s been wonderful because it has given me a purpose, to think back about things, to set aside part of the day to write.

"At first it was just the sadness because you just remembering the last few days he was really ill, whereas going back to when we met and all the fun we had. There was lots of fun to be had.

"We always had a lot of fun. Growing in our jobs, having our families. Quite honestly, I can’t remember life without him." 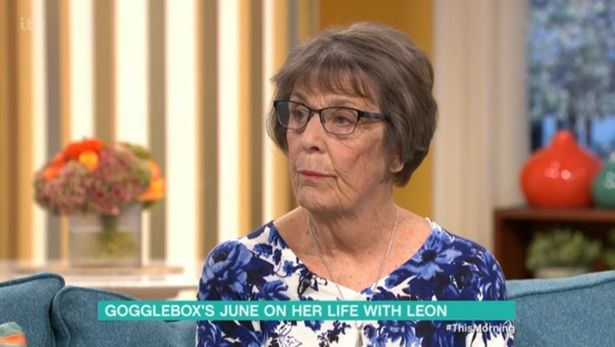 She also recalled how it was an "instant attraction" when she met Leon, when she was 18 and he was 21.

"It was instant attraction I think.

"I can remember the voice. It was a very deep, throaty voice and the cheeky grin."

Viewers were left in tears after June's appearance on the morning show.

I love Leon and June I'm so glad to see she's ok. He's very much missed by everyone.

I’m in tears, Ruth is in tears. Leon was so loved. June is coping so well. Gogglebox isn’t the same without them. 💔💔 #ThisMorning

Moved me to tears. Loved his humour & on point comments. A one off! Congrats on the book. #LeonAndJunesStory