"People with Down's syndrome have hopes and dreams just like typical people. We don't need to have anyone to feel sorry for us."

Lily D. Moore, an American actress, is determined to become the first person with Down's syndrome to win an Academy Award.

Lily starred as one of the leads in Hallmark's Color My World with Love, a romantic comedy, and before that she appeared in Never Have I Ever and Single Drunk Female.

In a recent interview with People, Lily spoke about her hopes for the future.

She told the publication: "I want to be the first down syndrome actress to win an Oscar."

She also added that getting a lead role is one of her dreams.

"I finally got that chance," she said.

As well as her acting career, Lily is passionate about working in the healthcare sector and is attending Clemson University this autumn. 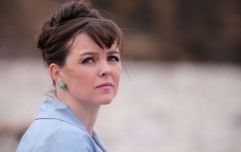 END_OF_DOCUMENT_TOKEN_TO_BE_REPLACED

Ahead of embarking on her studies, she said: "I really want to help people and save lives."

Elsewhere in the interview, Lily spoke about how people with Down's syndrome are treated, and she dispelled these ableist attitudes.

She said: "People with Down syndrome have hopes and dreams just like typical people. We want friends, get a job, go to college, fall in love, live independently, and also get married."

Lily added: "We don't need to have anyone to feel sorry for us."

The actress also credited her parents and her two older sisters for being "super supportive" and "super helpful".

Lily's latest film Color My World with Love premieres on 12 June on Hallmark Movies and Mysteries.


popular
Jacques O'Neill speaks out about Paige and Adam's relationship
Planning your next getaway? Here are 6 fun family activities to try this summer
4-year-old girl killed in house explosion in London, police confirm
Child killed in house explosion in London
Barry Keoghan announces the name of his baby boy
This mum's post about dying to send her kids back to school is too funny
Ashling Murphy had so much more to give, says heartbroken parents
You may also like
4 years ago
Emmerdale actress Scarlett Archer says she was sexually harassed
4 years ago
Actress Julia Louis-Dreyfus announces she has breast cancer
5 years ago
Elizabeth Banks forced to apologise for Spielberg comment
5 years ago
Olivia Wilde Welcomes Her Second Child 'Like A Boss' (And The Name Is Too Cute)
3 days ago
Everything we know about the Love Island reunion
3 days ago
Gardaí warn public of "Hi Mum" text scam
Next Page