Derry Girls star Siobhán McSweeney, who plays Sister Michael on the show, has urged people to stop using double cube plugs after a fire started at her home.

The actress took to social media to warn people about the dangers and told the details of her dramatic night.

Thankfully, she was out of her home at the time but was alerted by neighbours.

"I've got some bad news," Siobhán wrote. "Last night my flat went on fire. Thankfully I was out at a stupid play otherwise it could have been a worse story.

"The fire alarm alerted my neighbours and thankfully they're all safe too."

"2 fire brigades arrived, chopped down my new front door to discover the whole flat in acrid smoke and my bedroom so hot it had cracked the windows." 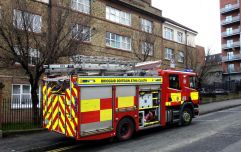 END_OF_DOCUMENT_TOKEN_TO_BE_REPLACED

She continued: "The fire investigator did a thorough examination. He finally took my aside and explained what happened. The cube double adaptor had fallen out slightly (less than 2mm) out of the socket by my bedside and had created an 'electrical arc' which sparked and started the fire."

Siobhán went on to say that her flat "is ruined" and while she was able to save a few items, all of her clothes smell like smoke.

She is currently staying with a friend but urged everyone to get rid of cube plugs ASAP.

It’s this I’m talking about. TAKE THEM OFF THE WALLS NOW AND PUT THEM IN THE BIN. pic.twitter.com/4I6eBSokDG