Dublin fire brigade delivered a baby in a car park this evening.

According to the fire brigade's Twitter account, the fire crew from Kilbarrick delivered a baby boy in a car park on the Malahide road.

They then sent both the mother and her newborn on their way to the hospital.

Our fire crew from Kilbarrick have just delivered a baby boy in a car park on the Malahide Road. Mother & baby on way to hospital

The tweet has received over 180 likes already, with users expressing their congratulations to both mother and baby boy on the social media site. 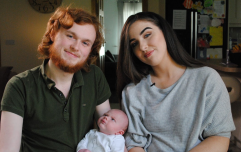 END_OF_DOCUMENT_TOKEN_TO_BE_REPLACED

One user said "well done" to all the crew.

Another said that the mother delivered the baby herself, but that they were sure the fire brigade were a "great support."

Dublin fire brigade responded agreeing, saying "mum does the work, we just assist!" and a thumbs up emoji.


popular
Rupert Young, twin brother of Will Young, passes away, aged 41
Answer our short survey for a chance to WIN a stay for two at the Dingle Skellig Hotel in Kerry
The super-easy DIY remedy that will smooth and soften your dry, cracked feet
Protecting children’s skin from the sun – here's what a dermatologist wants you to know
DIY: Here's how to transform your old trampoline into a super-cosy 'summer hideout'
Classic baby names: 10 names that have kept their charm these past 100 years
Could this really be the most perfect family staycation?
You may also like
1 month ago
Raw, real and beautiful: Award-winning photographs show the power of women in childbirth
1 month ago
Say what?! Mums reveal the worst things their partners said after birth
3 months ago
The golden hour: Skin-to-skin after birth benefits your baby – even 20 years later
5 months ago
One mum's labour lasted only 45 minutes (and doctors reckon they know what could be the trick)
5 months ago
Mum confession: I couldn't stop shaking after I gave birth – and it is actually pretty normal
6 months ago
Babies born via C-section have very different microbiome in their gut than babies born vaginally
Next Page