Is there anything as stressful as racing around the aisles of your local Supervalu at 5.30pm, desperately trying to figure out what the heck you are going to cook for dinner that evening?

The answer is no. No, there is nothing more stressful. Especially if you, like me, also have two tired, cranky kids in tow who is just making the whole debacle even more hellish than it already is by complaining over every suggestion you are making in regards to the dinner, and crying because no, you don't remember that you had promised them ice cream the next time you went into a shop.

And just the (rather frequent) scenario above is the exact reason I love this clever idea that UK mum Lou Kirsty Yeoman recently came up with.

Originally sharing the idea on the Organise my UK home ltd Facebook group, Yeoman explains how, after spotting the idea on a Slimming World group, she decided to use it to create a similar plan for all the family dinners. 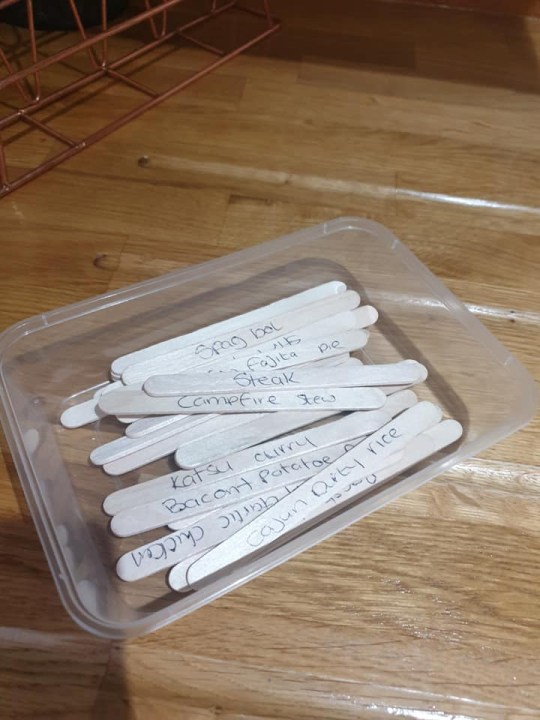 She DIY-ed a board, painted it and added screws and string, which would allow her to easily hang it to her kitchen wall. Next, Yeoman stuck a sclip beside each day, and wrote a selection of all her family's favourite meals on some wooden lollipop sticks. 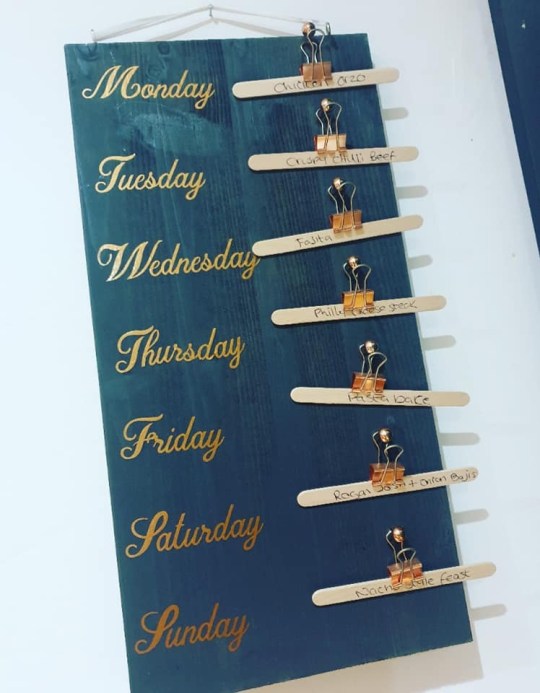 Then, the crafty mum explains, each week she simply picks out seven sticks at random and clips them onto the board. The rule is that whatever the sticks says goes and she can go out and buy all the ingredients. Options include chicken orzo, crispy chilli beef, fajita, pasta bake, rogan josh, nachos, spag bol and campfire stew.

Yeoman herself runs a business printing vinyl stickers, so finding stickers for her board was not an issue – but you can also probably stencil on something similar, or head over to Pinterest, where you'll find lots of free printables you can download and print at home on your own printer.

After posting her DIY project online, plenty other parents were quick to comment on how clever the idea was, and how they had been inspired to create their own versions.

‘This has made life so much easier," one person wrote. "No thinking what to make every day pick a stick and that’s what we are having.’

While someone else added: ‘I’m planning to do something like this for jobs around the house for the kids. Never thought of doing one for meals too.’


popular
Hobbits and hot tubs: My family's stay at Mayo Glamping
Three children and two staff test positive for COVID-19 at Meath creche
Totally tropical baby names inspired by Hawaii
This hair colour is set to be HUGE this year – and we can see why
4 ways to fix hard slime with ingredients you probably already have at home
Mila Kunis opens up about her husband's marriage to Demi Moore
This Jersey Shore star wants to find her biological family after recently opening up about her adoption
You may also like
1 day ago
It's almost time: 10 back-to-school-once-more tips every parent needs
1 day ago
The tooth fairy letter many parents are feeling a little divided about
2 days ago
Pinterest reports spike in some very specific searches ahead of back-to-school season
4 days ago
10 slightly painful reasons there is no such thing as a sick day when you're a mum
5 days ago
Positive parenting: I have an open door policy at my house and here is why
6 days ago
These astonishing brain scans of toddlers show the impact love has on us
Next Page