Gender neutral toys: Why it's so important to let children choose

"Mum, I might ask Santa for a camera," said my seven-year-old on the way to school one morning last week. She likes to be organised.

"Oh – there’s a blue one and a pink one," said my six-year-old. "But Santa will know to bring the pink one, because pink is for girls."

"Well," I answered, "Is that really true? Don’t you have lots of blue clothes and toys at home, and don’t you both say that blue is your favourite colour?"

I looked in the rear-view mirror. They were having a think about this.

"Yes, but when they make a pink one and a blue one of a toy, the pink one is for girls," said the seven-year-old after a minute.

They had another little think about this, then agreed that my eldest could indeed ask Santa for the blue camera if she so wished. Or the pink camera. All options still open.

It’s interesting to see how ingrained in them it is that pink is for girls, even though they’ve never been told that at home, and the little brother in their lives has every pink toy going. He’s the third child, so it’s hand-me-downs all the way for him.

And perhaps it’s unavoidable – they are surrounded by pink-is-for-girls doctrine everywhere – clothes, toys, stationery, school bags, duvet covers, hairbands and, memorably, a toy hoover that has 'Just For Girls' printed on it.

I am at fault too – I haven’t gone out of my way to sell them a gender-neutral message either. When my eldest was born, I bought all the pink. Partly because that’s mostly what was in the shops, and also because, truthfully, I quite like pink. (I know, I’m letting the side down). 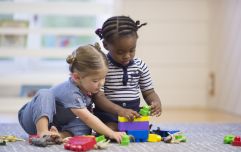 END_OF_DOCUMENT_TOKEN_TO_BE_REPLACED

But I bought navy and yellow and red and blue too, and she often went to crèche in jeans and a mud-beige top – because those packs of four T-shirts always seem to come with one inexplicably awful colour.

Now, at six and almost eight years of age, my daughters pick their own clothes. Often they want pink and sparkly, sometimes they want dusky blue or bright yellow, or even mud-beige.

It would be foolish of me to assume that their more-than-occasional preference for pink and sparkly is down to some innate programming. It’s very much a product of what they were dressed in by me, what’s available in the shops and what’s on view all around them. And all of that is OK, until they start to think they must go for the pink option. Until they start to see rules and restrictions, where of course there are none. Until they start to categorise themselves as being in the pink camp or not. Until they start to see unnecessary divisions between males and females. So anything that contradicts that message is, I think, a good thing.

Which is why I was surprised to see some negative reaction to US retailer Target’s recent announcement that it would no longer use signage that said 'Girls' or 'Boys' in toy aisles. The toys themselves are not moving or changing in any way; this is just a small change to the signs.

Not labelling toys – not putting children in one set of toys or another – is something that most people see as sensible, but there was outcry in some quarters. Commenters threatened to boycott the store, pulling out that handy phrase, "It’s political correctness gone mad."

By directing kids to one set of toys or another – whether through signage, labelling, or the colour pink – we’re restricting them from choice and reducing their options. It’s not something we’d want to do with careers or opportunities for adults, so why start with toys?

A few days after the camera conversation, I was out for a walk with my six-year-old. We passed a small girl taking a photo with a smartphone. My daughter remarked that her sister would love something like that.

"Though actually, she’d love the blue camera too," she added. "And she’s very lucky to have a mum who lets her have blue things and follow her own destiny."

I decided to take the unearned compliment without quibble. And to enjoy that it’s still possible to change a six-year-old’s mind. I don’t think either of my daughters will stop looking at pink and sparkly dresses, and I don’t want them to, but they might stop saying "pink is for girls" and that’s a good thing.

popular
Dunnes Stores launches stunning collection of Communion dresses
Emma Pattison: Tributes paid following death of head teacher and her family
Siblings kidnapped in March 2022 have been found alive
Former YouTube star Jim Chapman and wife Sarah expecting second child
Teenager killed in shark attack after swimming with dolphins in Australia
Adam Levine reveals gender of his and wife Behati Prinsloo's baby
Fiona Pender murder suspect could return to Ireland
You may also like
4 days ago
Toddlers are happier with fewer toys, study finds
4 months ago
Smyths issues warning to parents ahead of Christmas
6 months ago
Toddlers are happier with fewer toys, study finds
8 months ago
Mum horrified after finding a knife inside the box of a doll she was buying for her daughter
9 months ago
Another way your child can use those 'ball pit' balls that are all over the house
1 year ago
Dad is furious with Aldi over 'depressive' and 'inappropriate' toy for sale
Next Page