It’s up for discussion since Yahoo CEO Marissa Mayer announced that she’s expecting twins, and will take “limited time away.” When her son was born in 2012, she took just two weeks off, so the expectation is that she is planning something similar this time around. 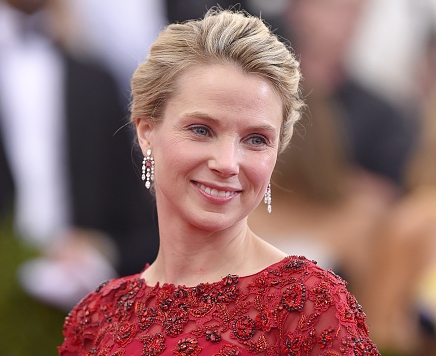 You can imagine the collective sigh of frustration from working mothers in the US (where there is no state maternity leave) when the announcement was made. It’s difficult to fight for time off when one of the country’s most high-profile working mothers effectively turns her nose up at it. Yahoo gives sixteen weeks paid leave but if Mayer doesn’t need it, why does anyone else?

For those of us who feel two weeks isn’t quite long enough to be doing anything other than sitting on the couch and occasionally bursting into tears, news like this can be a bit irksome. It feels like one-upmanship, although Mayer was hardly thinking like that when she made her decision.

When it comes to parenting, we tend to look at what others are doing -sometimes questioning our own decisions - and maternity leave is no different. However, there’s an additional pressure with this particular decision – the often opposing pulls of career and family. Unfortunately, for many women, deciding on the length of maternity leave signals the first of many work-life conflicts to come.

When my eldest was born, I didn’t give huge consideration to unpaid leave. I knew it existed, but I didn’t know how we’d pay the mortgage if I wasn’t earning. I presumed that the “right” thing to do was to take the six months paid leave that I felt very lucky to have (my company topped up state maternity pay – something that more than half of Irish employers don’t do).
I also knew that I didn’t want to wait a long time before having a second baby. I wanted to be back at work for a reasonable amount of time before leaving again, with a view to doing as little damage to my career as possible.

So when my daughter was six and a half months old, she started crèche.
And thinking back, it’s something I regret. I wish I’d taken more time.

Maternity leave had been quite lonely initially, but when my daughter got close to six months, there was a turning point. I found my rhythm. She started to sleep a bit more at night. She didn’t cry so much in the evenings. It was springtime, and everything was getting lighter and longer and better.

END_OF_DOCUMENT_TOKEN_TO_BE_REPLACED

So just when I was going back to work, I started to enjoy being off.
I’d love to know what an extra few months might have been like. I think we’d have found a way to pay the mortgage. And in terms of career damage; the office for which I worked closed a few months ago, and I’ve switched to something completely different. So in the bigger scheme of things, a few more months of maternity leave wasn’t going to do any harm at all.
Of course, hindsight is wonderful, and back then, I had no idea that six years later my office would shut down. I made what I saw as the right decision – balancing career and home. Taking some time off, but not too much.

And when I got back to work, I jumped straight in, eager to show that I hadn’t changed.
It’s not something that men have to do – nobody expects them to change when they have children, but there’s an inherent assumption that women might. We’ve all heard speculative conversations – is she taking a full year? Will she come back full time? How will she manage now she has three? I can’t see her sticking with it…

Women have to work hard to negate the assumptions, and particularly so if they’ve taken extensive time off. It’s an uphill struggle, and it’s not surprising that some drop-off.

So, how much maternity leave should you take?

It’s a pointless question because of course there’s no single correct answer. It depends on so many factors – job, finances, maternity leave policies, partner’s job, the number of children, childcare availability, career opportunities, and how long you want to stay at home. The combination of circumstances is never the same for any two people, so it’s a very individual decision. Which is why it shouldn’t matter what anyone else does, including Marissa Mayer.

“After all, she’s held up as a role model for ambitious women the world over. If the boss, who has already proved herself by taking one short maternity leave, doesn’t feel like she can leave her desk for more than a few days, what hope for the rest of us?”

But has she really held herself up as a role model, or did we make her that, because she’s female, she’s hugely successful in the corporate world, and she’s a mother?

Her only loyalty is to Yahoo, and to her own family. They are the people with whom she has to plan her maternity leave. If two weeks is too short, it will be her children and her own wellbeing that will suffer, not the rest of us.

To working mothers, it may feel as though she’s letting the side down, but much as we might like her to take up the cause, it’s not her responsibility to fight the fight.

Having said all that, I’m kind of glad she’s not my boss.

popular
The government has launched a new funding model for Irish childcare services
Expert says Cocomelon acts "as a drug" to kids' brains
The release date for season 12 of Call The Midwife has been announced
Former Grey's Anatomy writer says she has "no excuse" for lying about cancer
Elf on the Shelf is actually pretty bad for your kids, according to an expert
These 5 foods could increase your chances of having twins
Father took daughter to hospital three times before she died of Strep A
You may also like
6 months ago
Being raised by a working mum has long-lasting benefits to both girls and boys
8 months ago
Sandra Bullock says she's taking a break from acting: "I just want to be 24/7 with my babies"
1 year ago
British MP told she cannot sit in Commons with baby son
1 year ago
"Is she ever with her kid?": Laura Whitmore hits out at cruel comments
1 year ago
The one little change I made that has completely changed our busy mornings
1 year ago
The Dutch have a parenting tradition that could make your life a lot easier
Next Page