She may be all over social media thanks to her supermodel mum Chrissy Teigen's love of Snapchat, but little Luna Legend doesn't watch TV.

Her father John Legend told Entertainment Tonight that he and wife Chrissy haven't exposed the one year-old to much technology yet.

"We actually haven’t given her any entertainment [or] television yet, but soon enough," he said. "She sees us on our phones all day and she’s, like, jealous. She wants to grab them all the time.” 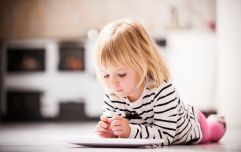 END_OF_DOCUMENT_TOKEN_TO_BE_REPLACED

The singer, who has been involved in charitable causes including HIV/AIDS awareness, relief efforts for Hurricane Katrina and education, said that Luna weighs on his mind when it comes to his philanthropy.

"I think about the world I want my daughter to grow up in," he said.

Where do you stand on kids and TV time? Let us know your thoughts in the Facebook comments or join the conversation on Twitter @HerFamilydotie.


popular
Researchers now believe there is a link between consuming processed food in pregnancy and autism
Penneys is currently selling €11 loafers that look JUST like the famous Gucci ones
Holly Willoughby and Philip Schofield gave emotional tribute to Caroline Flack on TV last night
'I really did want to stay' Maura Higgins is the latest skater to get eliminated from Dancing On Ice
Mum shares post about how she was only paid €8 after working over 70 hours
We just found the most incredible €80 pink embroidered midi dress in River Island
Introducing the €20 Zara dress that will be your new wardrobe go-to (and it comes in three colours)
You may also like
5 days ago
ITV's new crime drama Honour will be the TV show that everyone is talking about this year
1 week ago
There's a Golden Girls-themed cruise setting sail next year and we're packing our bags already
2 weeks ago
Corrie fans stunned as Katie McGlynn made a surprise appearance last night
3 weeks ago
'Goodbye Louise': EastEnders' Tilly Keeper shares tribute as her exit scenes air
4 weeks ago
Here's the lineup for this week's Graham Norton Show
1 month ago
There's a new period drama from the creator of Downton Abbey on the way
Next Page