Diary of an Office mum: The best part of the day (or not)

Andrea Mara is a shoe-obsessed, coffee-loving mother of three from Dublin. When she’s not working in financial services, or looking after the kids, Elissa, 7, Nia, 5 and Matthew, 3, she’s simultaneously making tomorrow’s school lunches, eating Toblerone and letting off steam on her blog.

I wish I had more time with my kids.

Like working mothers everywhere, I lament the long week spent away from them. I get anxious when I think about the fact that they’re being raised in childcare. I worry that in years to come, they’ll be in therapy, talking through their abiding memories of waving me off to work each morning.

So like everyone else, I maximise my time with them. It’s all about quality over quantity; outings at the weekend, annual leave during school holidays, and relaxing family time each evening.

In my head, the quality time we have together after work is a wonderful gift – a time to spend catching up on their day. Maybe a game, or some crafts after homework, followed by a family meal, and a cosy bedtime routine.

The reality is something very different.

I come in the door, and immediately after a round of hugs and kisses, the three of them start to talk at once. Which is lovely and exuberant of course, except that I can’t hear anything that any of them are saying. That’s when the trouble starts.

“Mum, I just told you I fell in school, and you didn’t even listen,” says the seven-year-old, looking annoyed.

“Mum, I was talking first. I have to bring in money for a raffle tomorrow – why are you not listening to me?” says the five-year-old, looking cross.

END_OF_DOCUMENT_TOKEN_TO_BE_REPLACED

“Mummy, why you not look at my card I make you?” says the three-year-old, looking hurt.

Well at least that’s what I think they’re saying – it’s difficult to know when they all speak at once.

I try some one-on-one attention, but by definition, that means leaving the other two out. I persevere, still in heels and coat, bag over arm, attempting to make everyone feel they’re getting a bit of my time and part of my focus.

Eventually they simmer down, and I suggest we do homework. Which is what we do every night, yet every night there is a mix of abject surprise (“What? Homework? Now?”) and utter disinterest (“Oh, no, I have to do something…else…”).

I call the two school-going girls eight hundred times, and they finally sit at the table.

Then the seven-year-old says she’s already done her homework.

“It says in your journal to do page 51, but it’s not done in your workbook?” I say to her.

“Huh? That’s so weird. I definitely did it earlier. It must have somehow got rubbed out?” she says, looking suitably mystified. Sigh. I suggest we do it again, and hope it doesn’t somehow rub itself out a second time. 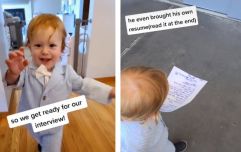 Mum goes viral after taking her toddler to a job interview

END_OF_DOCUMENT_TOKEN_TO_BE_REPLACED

The five-year-old says she has no homework.

“Your teacher said we have to go over your phonics sounds every night anyway,” I remind her.

“She didn’t say that today, so we have none to do tonight,” she insists, climbing down from her chair to go off to colour or glue or put glitter on something, completely ignoring my pleas to come back to the table.

At least the toddler is quiet. He’s happily painting and not making a sound. Wait, that’s probably not a good sign. And it’s not. He’s painting his face and his shoes and a top that’s hanging on the radiator (please don’t judge me for having clothes on the radiator).

“COULD YOU ALL PLEASE STOP WHAT YOU’RE DOING AND DO WHAT I ASK!” I say, in something that’s not my indoor voice but not quite losing the plot. Yet.

“You want me to stop doing my homework mum? OK, I’ll stop,” says the seven-year-old, walking away from the table. I’ll skip over what happens next but the plot is most definitely lost, and they do finally get the message - they sit down to the herculean task of homework.

Then it’s time for that lovely family dinner.

“I don’t like this,” says the toddler, heading off to play with his train-set. 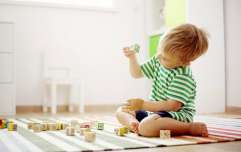 If your child wants you to play, but you don't have time – try this trick

END_OF_DOCUMENT_TOKEN_TO_BE_REPLACED

“But you liked it yesterday? Can you come back?” I try, knowing I’ll get nowhere, but needing to maintain the façade of being in charge.

“I’m eating it mum!” says the seven-year-old brightly, then gets up to scrape peas and carrots into the bin.

“But what about the veg? You can’t just eat the potato and the chicken,” I say.

“I did eat them – I ate two peas and one piece of carrot,” she says, genuinely delighted with herself.

“I ate all my peas, not just two,” says the competitive five-year-old.

“Well done!” I say, though I later find all her peas on the floor under her chair.

Meanwhile, I carry the toddler squirming and squealing back to the table, but he gets down again, accidentally knocking a glass of milk in the process. I grab kitchen roll and try to mop it up while listening to a story about one child’s game in the yard today and another child’s idea for a shop she’s going to open when she grows up.

“Me want my milk!” wails the toddler, crying over the proverbial.

“TV time!” I yell, and it’s like the whistle at the end of the match – game over; everyone’s a winner.

Now I’ll have time to clear the table, make school lunches and put on a wash. Except of course I make a cup of tea and open Facebook. And in keeping with the working mother guilt thing, I feel guilty about it – just not enough to stop. Parents need a breather too.

And the thing is, for every disastrous evening like this, there’s an amazing one; one that makes it all worthwhile, and reminds me that work is work but life is life. One where everything runs smoothly, and I get to hear how each child’s day went. One where they’re so absorbed in chatting, that they forget about TV. One where bedtime runs smoothly and isn’t a chore. One where the hugs are tight, and the smiles are wide.

Well OK, for every ten disastrous evenings, there’s one amazing one. But that’s OK - it’s just enough to keep me afloat.

For more from Office Mum, sign up to her blog, OfficeMum.ie.

popular
Dunnes Stores launches stunning collection of Communion dresses
Siblings kidnapped in March 2022 have been found alive
Police do not believe Nicola Bulley was a victim of a crime
Emma Pattison: Tributes paid following death of head teacher and her family
Stacey Solomon hints at baby girl's name as due date nears
Head of dive squad searching for Nicola Bulley thinks 'something's not right'
Richie Sadlier and wife praise hospital staff after finally becoming parents
You may also like
9 months ago
The working parent dilemma: When a child is sick
11 months ago
Was it wrong of me not to tell my employers I was pregnant?
1 year ago
Woman wins over €350,000 after she was fired for being pregnant
1 year ago
Lottie Ryan responds to mums who said she should be "ashamed" for returning to work
1 year ago
I am a working mum and here are my best tricks for navigating stressful mornings
1 month ago
Are Christmas Eve Boxes worth the money or a total waste?
Next Page