Earlier this week Chrissy Teigen revealed on Twitter how she had picked the gender of the embryo she is carrying during the IVF procedure – to ensure that she and her husband, musician John Legend, would have a daughter.

"I've made this decision...Not only am I having a girl, I picked the girl from her little embryo. I picked her and was like, "Let's put in the girl,"' she explained of her thought process.

Not to make anyone think she had a preference, Chrissy added that 'a son 'will come along.'

'We'll get there too, so it’s not like we really have to pick," she said. However, she did admit: "The number of embryos we have left is not matching the number of people I want at my dinner table, so I'll have to do it again. I wish I had frozen my eggs earlier. We have a few more on ice."

But Teigen, 30, who has been open about her struggles to conceive naturally, might not have foreseen the reaction her many social media followers would have to this particular piece of information, and suddenly found her Twitter feed aflame with criticism and harsh words.

But the model was quick to respond, writing back: 'what is that (sic) difference though? i've already created embryos with a doctor. only after must it be random?' 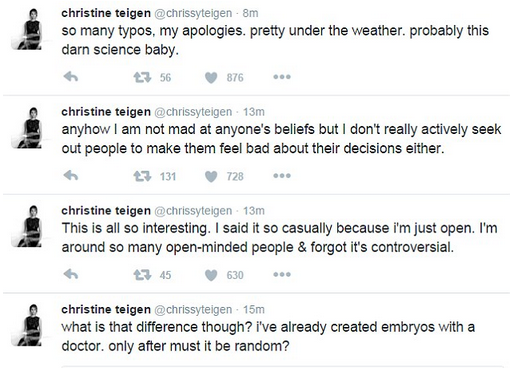 And after a barrage of negative messages, Chrissy wrote: 'What year is this!? And for the record, I am always happy and open to speak on infertility. The more casual, the better! I don't mind.' 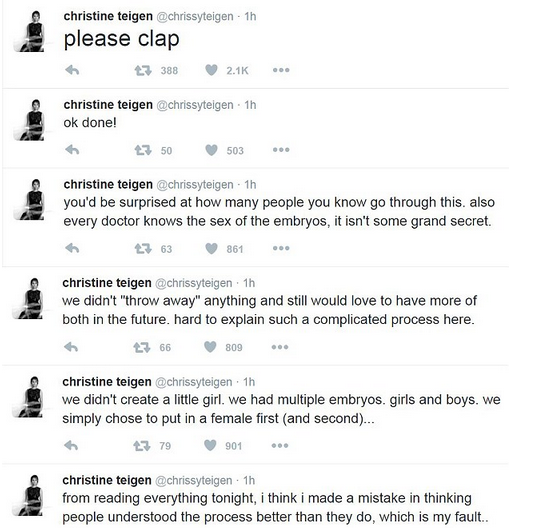 To try and divert from all the seriousness and critical words, Chrissy then then joked: 'I also picked the embryo with a taste for bacon, a knack for magic and size 7 feet so she can always find shoes'. What do YOU think, readers? Would you ever pick the gender of your baby, if given the option? Gender selection is currently not legal here or in the UK, but the procedure can be performed in other countries. Join the conversation with us Twitter at @Herfamilydotie


popular
Hobbits and hot tubs: My family's stay at Mayo Glamping
Ronald McDonald House launch Barróg bunny to help raise much needed funds
According to experts lunchboxes could be a big transmitter of Covid-19
The Mrs Hinch approved hack that'll help you get rid of flies in your house
These 5 Foods Could Increase Your Chances of Having Twins
The common nappy mistake many of us make that could actually end up costing you a fortune
20 Unisex Irish Baby Names That Are Absolutely Magical
You may also like
3 weeks ago
86 per cent of Irish women experience hurtful comments about their fertility
3 weeks ago
Jools Oliver reveals she suffered a miscarriage during lockdown
4 weeks ago
Global crash in fertility rates set to have a "jaw-dropping" impact on societies
1 month ago
Secondary infertility: The little-known issues surrounding the inability to conceive again
1 month ago
Fertility: IVF in the time of Covid 19 – we just sat down with an expert to find out what is going on
1 month ago
Men looking to concieve a child are being told to head to bed before this time
Next Page